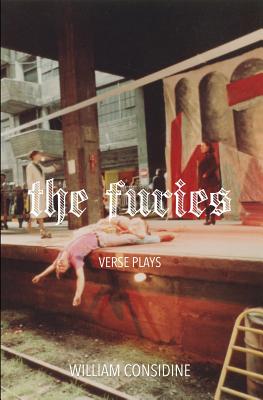 "At long last here's Bill Considine's considered, rollicking, breezy, deep, avant-post take on what Poetry is, what Theater is, and what happens when these arts tumble dance through history together only to land simultaneously on page and stage. Equal parts Sophocles and Ashbery, whose lineage from Electra right through to 'The Heroes' he invokes, Considine riffles the classics to fan a new breath of Pure Future. Perform these plays in your mind's eye or take the dare and produce them on stage - they are transportative. IOW, as Agamemnon says in 'Agamemnon, King of Cars', 'Let's prowl the great desert, /Whooping on speed, /In pick-up trucks or tanks./Let's all wear cowboy hats.'" - Bob Holman

"'The Furies' is a terrific intervention, a unique contemporary dramatic verse collection with tropes of classic themes and characters. Considine has a poet's lyric ease, wit and calling, and a sensibility that travels through the complicated dynamics of history and war. As Orestes asks Electra, "Shall I talk of our childhood and/ all the times you silently/ stared at the summer leaves/ and tried to imagine, total death, / nuclear war, all at once, and why?/ Do you remember our civil defense drills..." This is a refreshing "oral" book and generously available here for actors and poet-performers on the stage, as well as readers, in the hand. Bravo " - Anne Waldman

"Just when I was wondering whatever happened to poets' theater, along comes William Considine's thrilling collection of four verse plays, 'The Furies.' Much poets' theater is heavy on the poetry (making it soporifically undramatic) or ignores language for quirky effects. Considine's work, however, is miraculous both onstage and in the ear. Not only that, he is learned, funny, witty, big-hearted, and timely. Take, for example, Solon's "daring disobedience" in Prologue: Prehistory: "You teach people / to say fantasies in public / and enjoy tall tales in meetings, / so faking will succeed / as the political intelligence / of our people." Lincoln in Queens is as human as anything by Woody Guthrie, with a unique take on our most written-about president, who is "back from the dead in Queens," busy urging the narrator to "find the Furies" and speaking "of God like a lost lover: I lived in faith in the old-fashioned fable / of suffering and moral endurance. / We purged the blood-curse on our nation: / slavery Now you can escape / the iron shackles of war, / the fable of blood atonement, / the faith of Furies." After small productions around New York City over many years, it's great to have these plays in one place to be read and reread, and, one hopes, performed again." --Elinor Nauen

'The Furies' is an attack in dramatic verse on mythic sources of war and the tragic cycle. What starts in jest and hope becomes tragic and then deeply personal. Prologue: Prehistory sets the stage in theater and theory. Agamemnon, King of Cars is a comic goat song; Iphigenia refuses to be sacrificed, Odysseus returns from the underworld to plead for peace, and the chorus decline to go to war. Electra turns the foretold stories on their head, as Electra and Orestes refuse their parts, leading to new tragedy. Lincoln in Queens is a tale in which Lincoln commands a contemporary poet to go in search of the fabled Furies, to free them and abolish war. It's a tale in seven segments - Iron, Unemployed, A Vision, Depression, Journey, The Furies, and Offering - ranging from the Rustbelt and lingering wounds of the great war through personal and global depression to a final vision at the white sands of Alamogordo. These pieces, produced separately, are brought together here for the first time as a unified series.