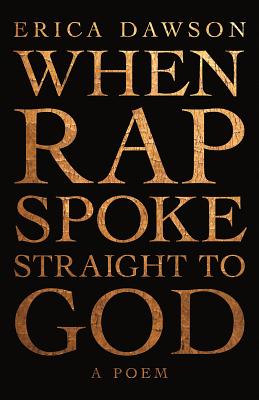 A book-length poem navigating belief, black lives, the tragedies of Trump, and the boundaries of being a woman.

"When Rap Spoke Straight to God is utterly transporting. In language both elevated and slangy, saucy and tender, Dawson lovingly weaves the reader around her finger.” —Jennifer Egan

When Rap Spoke Straight to God isn’t sacred or profane, but a chorus joined in a single soliloquy, demanding to be heard. There’s Wu-Tang and Mary Magdelene with a foot fetish, Lil’ Kim and a self-loving Lilith. Slurs, catcalls, verses, erasures—Dawson asks readers, “Just how far is it to nigger?” Both grounded and transcendent, the book is reality and possibility. Dawson’s work has always been raw; but, When Rap Spoke Straight to God is as blunt as the answer to that earlier question: “Here.” Sometimes abrasive and often abraded, Dawson doesn’t flinch.

A mix of traditional forms where sonnets mash up with sestinas morphing to heroic couplets, When Rap Spoke Straight to God insists that while you may recognize parts of the poem’s world, you can’t anticipate how it will evolve.

With a literal exodus of light in the book’s final moments, When Rap Spoke Straight to God is a lament for and a celebration of blackness.  It’s never depression; it’s defiance—a persistent resistance. In this book, like Wu-Tang says, the marginalized “ain’t nothing to f--- with.”

Erica Dawson is the author of two collections of poetry:The Small Blades Hurt (Measure Press, 2014), winner of the 2016 Poets’ Prize; and, Big-Eyed Afraid (Waywiser Pess, 2007), winner of the 2006 Anthony Hecht Prize. Her work has appeared in three editions of Best American Poetry; the Pushcart Prize XLI: Best of the Small Presses, Resistance, Rebellion, Life: 50 Poems Now, Barrow Street, Bennington Review, Crazyhorse, Harvard Review, Virginia Quarterly Review, and numerous other journals and anthologies.
She lives in Tampa, FL and is an Associate Professor at University of Tampa, where she also directs the low-residency MFA program.

When Rap Spoke Straight to God is utterly transporting. In language both elevated and slangy, saucy and tender, Dawson lovingly weaves the reader around her finger.

Again, Erica Dawson has expanded the possibilities of what we think poetry can do. The lusciously long poems in When Rap Spoke Straight to God are sensual and openly political and so well-crafted in epic blank verse that we begin to see how the contemporary moment has yet to fully correct far too many historical moments.  And it does this with a lyric intensity that I dare say can only be achieved by a poet fully aware of her place in time and its potential.

A defiant celebration of Blackness.
— Colorlines

[Dawson] is devoted to filling in the cultural blanks . . .  Her subject, in a way, is blanks: needs unmet, crimes unacknowledged, thoughts unexplored. By writing, she begins to fill them.
— New York Times Magazine

Erica Dawson delivers a short collection of long poems that take our current time and dissect it into beautiful and evocative pieces. Harsh but never hard, unflinching but never violent, she speaks to the experiences of black women, celebrating the best of black culture and lamenting its struggles. Wrapped in and elevated by exquisite religious allusions, Dawson’s poetry shines.
— World Literature Today

When Rap Spoke Straight to God extends the tradition of call and response, of spirituals, hymns, and hip-hop. . . . Dawson’s collection is prophetic and vibrant. Every poem feels like a testimony. Each stanza is holy.

Erica Dawson is a
poet of verve and nuance, of high learning and pop culture, of a classical
music she seems to have invented herself.
— Mary Jo Salter