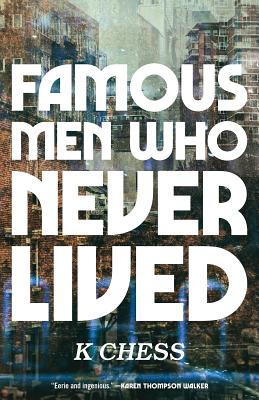 Wherever Hel looks, New York City is both reassuringly familiar and terribly wrong. As one of the thousands who fled the outbreak of nuclear war in an alternate United States—an alternate timeline, somewhere across the multiverse—she finds herself living as a refugee in our own not-so-parallel New York. The slang and technology are foreign to her, the politics and art unrecognizable. While others, like her partner, Vikram, attempt to assimilate, Hel refuses to reclaim her former career or create a new life. Instead, she obsessively rereads Vikram’s copy of The Pyronauts—a science fiction masterwork in her world that now only exists as a single flimsy paperback—and becomes determined to create a museum dedicated to preserving the remaining artifacts and memories of her vanished culture.

But the refugees are unwelcome and Hel’s efforts are met with either indifference or hostility. And when the only copy of The Pyronauts goes missing, Hel must decide how far she is willing to go to recover it and finally face her own anger, guilt, and grief over what she has truly lost. With Famous Men Who Never Lived, K Chess has created a compelling and inventive speculative work on what home means to those who have lost it forever.

K Chess is the author of short stories honored by the Nelson Algren Literary Award and the Pushcart Prize. She was a W. K. Rose Fellow, earned an MFA from Southern Illinois University, and currently teaches at GrubStreet. She lives with her wife in Providence, Rhode Island.

A beautifully written and conceived novel, and one whose message of empathy across lines of difference is much needed.
— Tor.com

Eerie and ingenious. . . . Describes an impossible world in order to more clearly show us our own.
— Karen Thompson Walker, author of The Dreamers

Spectacular.
— Dana Spiotta, author of Innocents and Others

A beautiful labyrinth of a novel—electric, formidable, and wildly moving.
— Laura van den Berg, author of I Hold a Wolf by the Ears

As timely and powerfully written as it is jaw-droppingly imaginative.
— Salon

A story about immigration wrapped inside a post-apocalyptic fable with multiple universes that also manages to be a meditation on art, fate, trauma, and loss.
— The Millions

Stands among the best works of hybrid SF.
— New York Journal of Books

The novel jumps off from a fascinating premise into strange and fertile territory. K Chess constructs not just one universe, but two, and delicately entangles them to create a rich, engrossing exploration of displacement, history, memory, of the past and the present. Conceptually adventurous yet full of feeling, Famous Men Who Never Lived is a smart, thought-provoking and thoroughly enjoyable debut.