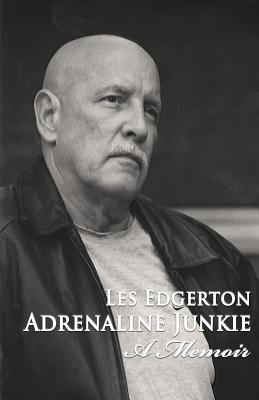 Adrenaline Junkie is more than a renowned, multi-award-winning author entertaining with his life history. Les Edgerton understands that backstory matters. It influences the present. So he journeyed through his past seeking answers for why he was the way he was. Seeking answers for his thrill-seeking, devil-may-care, often self-destructive, behaviors. Seeking a sense of personal peace.

Why was he compelled to be the best he could be in all his endeavors--legal or otherwise. What drove him to excel, then flee success, only to strive for supremacy in another field?

Adrenaline Junkie holds the answers. With nothing held back. With his life-saving humor, an indomitable spirit, and a fierce courage to expose the ugly and painful. Like the tough, raw, vulnerable characters Les writes about in his short stories and novels, he exposes us to a man fighting against family, society, and his own sense of injustice. Fighting for a moment--regardless of how fleeting--to feel in control of his life. And, as uncomfortable at times as Les's life adventure may be for us to witness, we come away grateful he took us with him.

So settle back. Meet a real-life, twenty-first-century Renaissance man. A real-life adrenaline junkie.

"Adrenaline Junkie is a raw and harrowing memoir that brilliantly combines great sensitivity with brutal honesty. Les Edgerton is never afraid to reveal his vulnerability--and culpability--as he takes us on a head-spinning ride through the bizarre and terrifying experiences in a life that was often defined by violence. The result is a breathtaking page-turner that will keep readers hooked from page one and will never let them go." --Lisa Lieberman Doctor, former Warner Bros. prodco president, president of Robin Williams prodco, Blue Wolf Productions

"Filled with stories of knifings, armed robberies, brutal prison fights, and Charles Manson (yes, that Charles Manson ), Edgerton proves that life can be stranger (and certainly more violent) than fiction. But Edgerton isn't just a guy with a tough story to tell. He's a poet who startles you with sentences both stark and darkly beautiful. An astonishing accomplishment." --Jon Bassoff, author of Corrosion

"Adrenaline Junkie is the compelling, beautifully written story of an extraordinary man who has lived on both sides of the tracks. Les Edgerton achieves a sort of sainthood among sinners, an apotheosis of rebellion and force, much like Harcamone at Fontevrault, or a hero in a Johnny Cash song, a huge, Promethean work of major significance and scale." --Richard Godwin, critically acclaimed author

"Edgerton's prose hits with the force of a hammer--as does his recollection of an America, both deeply flawed and wonderful, that is now more important than ever to keep in our sights. Adrenaline Junkie makes sense of one man's life while showing us all new aspects of our own." --Jenny Milchman, USA Today bestselling and Mary Higgins Clark Award-winning author of Cover of Snow and Wicked River

"No one can accuse Les of being a 'crime tourist'. He's lived the life, done the bird, and now he's written the book. Adrenaline Junkie should be on any prospective (or established) crime writer's list. An entertaining, darkly-rendered tale of one man's adventures in the very belly of the beast." --Tony Black, author of Her Cold Eyes