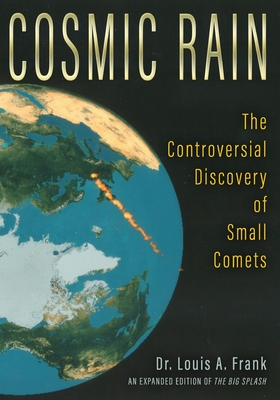 Every minute several huge "snowballs" break up as they approach the Earth and deposit a large cloud of water vapor in Earth's upper atmosphere. That's the startling finding that world-renowned physicist Louis A. Frank came to after studying the images from the Dynamics Explorer 1 spacecraft. His conclusion, based on data acquired at the limits of detection, created a storm of controversy among scientists. This is the story that was told in The Big Splash, published in 1990. But the story does not end there.

Less than a decade later, Frank's discovery of these previously undetected small comets was confirmed when images were received from cameras aboard a different spacecraft named Polar. The news of this "vindication" of Frank's provocative theory in 1997 made the front pages of several large metropolitan newspapers, including The New York Times, The Philadelphia Inquirer, and The Washington Post.

Cosmic Rain, a greatly expanded edition of The Big Splash, tells this never-before-told follow-up, in Frank's own words, of the confirmation of the existence of small comets and the harsh criticism he faced from colleagues for upsetting so many scientific applecarts in the process.