How to Outsmart Your Cat: The Puss 'n Boot Camp: A Tough Love Program to Reinvest Your Feline Friend with Entertainment Value (Paperback) 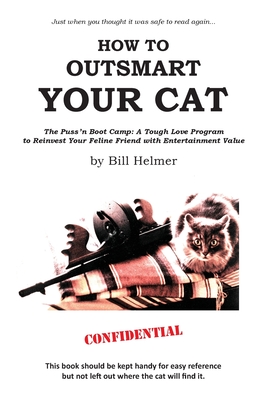 HOW TO OUTSMART YOUR CAT is a manual for cat owners who wish to inject a little levity into their relationship with their feline friend.

Legions of American cat owners will welcome this manual, the first ever to speak out frankly on a difficult subject that one's sense of embarrassment usually consigns to some small dark closet of the mind where one's mistakes are concealed.

In this case, the mistake is having fallen in love with a kitten for its cuteness, playfulness, and affection that seem to promise years of pleasure and amusement. Only a reluctance to admit that one was wrong, that one was taken in by a wily lower animal, deters many people from eventually admitting the truth and giving the creature to the first urchin who happens by, counting on him to lie to his parents and say, "The cat followed me home."

For the cat is an unusually gifted creature who instinctively knows that its owner, like an unhappy spouse, may endure a long and unfulfilling marriage rather than concede that he or she made a lousy choice in the first place. Correcting this problem and saving the relationship is the purpose of this program, which requires only determination on the part of the cat's owner. It will require a bit more on the part of the cat.