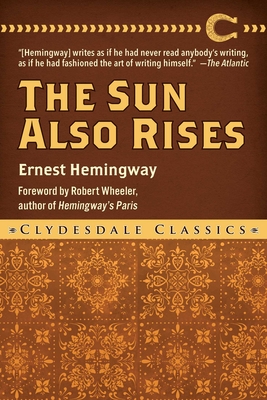 A handsome value edition of the timeless classic by Ernest Hemingway with a new foreword by Robert Wheeler,
Hemingway enthusiast and author of Hemingway's Paris

For nearly a century, The Sun Also Rises has endured as one of Hemingway’s masterworks, and is widely regarded as a prime example of the great American writer’s pioneering style and form. His first major novel explores powerful themes like masculinity and male insecurity, sex and love, and the effects of a brutal war on an aimless generation. This roman à clef is based on the real experiences and relationships Hemingway had in the early 1920s.

Set predominantly in France and Spain, the novel follows a group of disillusioned aimless expats tooling around post-war Europe, living hard, drinking heavily, and having complicated sordid love affairs. The novel is told from the perspective of Jake Barnes, a World War I vet turned journalist living in Paris, who is still in love with his former flame, the eccentric and charismatic Lady Brett Ashley. Meanwhile, Jake's friend, author Robert Cohn, becomes tired of his oppressive marriage and sets off to seek out adventure, becoming enamored with Brett himself.

They all eventually drift from the glitz and glamour of 1920s Paris to Pamplona, Spain, where they revel in the rawness of bullfights and alcohol-fueled parties, eventually devolving into jealousy and violent drama. This leads to Jake coming to a stark realization—that he can never be with the woman he truly loves.

Robert Wheeler fondly recalls time spent with his daughters along Boston’s Freedom Trail, from pushing a stroller, to walking hand-in-hand. The rich and fascinating stories evoked by each historic site, as well as the exceptional charm of Boston’s quaint city streets, shops, and restaurants, lured him back again and again, inspiring this sensory and absorbing book. Robert is also the author of Hemingway’s Paris: A Writer’s City in Words and Images and Hemingway’s Havana: A Reflection of the Writer’s Life in Cuba. He lives near the sea in New Castle, New Hampshire, with his wife, Meme.

“[Hemingway] writes as if he had never read anybody's writing, as if he had fashioned the art of writing himself.” —The Atlantic

“The ideal companion for troubled times: equal parts Continental escape and serious grappling with the question of what it means to be, and feel, lost.” —The Wall Street Journal