Stanley Kubrick and Me: Thirty Years at His Side (Paperback) 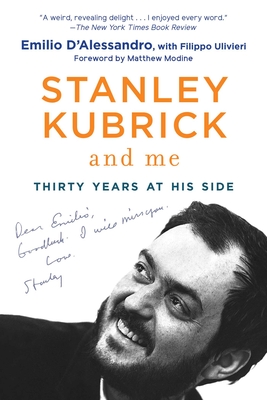 This intimate portrait by his former personal assistant and confidante reveals the man behind the legendary filmmaker—for the first time.

Stanley Kubrick, the director of a string of timeless movies from Lolita and Dr. Strangelove to A Clockwork Orange, 2001: A Space Odyssey, Full Metal Jacket, and others, has always been depicted by the media as the Howard Hughes of filmmakers, a weird artist obsessed with his work and privacy to the point of madness. But who was he really? Emilio D'Alessandro lets us see. A former Formula Ford driver who was a minicab chauffeur in London during the Swinging Sixties, he took a job driving a giant phallus through the city that became his introduction to the director. Honest, reliable, and ready to take on any task, Emilio found his way into Kubrick's neurotic, obsessive heart. He became his personal assistant, his right-hand man and confidant, working for him from A Clockwork Orange until Kubrick's death in 1999.

Emilio was the silent guy in the room when the script for The Shining was discussed. He still has the coat Jack Nicholson used in the movie. He was an extra on the set of Eyes Wide Shut, Kubrick's last movie. He knew all the actors and producers Kubrick worked with; he observed firsthand Kubrick's working methods down to the smallest detail. Making no claim of expertise in cinematography but with plenty of anecdotes, he offers a completely fresh perspective on the artist and a warm, affecting portrait of a generous, kind, caring man who was a perfectionist in work and life. The paperback edition has a new foreword by Matthew Modine, who is featured in the book and starred as Private Joker in Kubrick's Full Metal Jacket.

Emilio D'Alessandro left Italy at eighteen to become a racecar driver but turned to driving a minicab after the economic crisis in the late sixties ended his career. He worked closely with Stanley Kubrick for thirty years while raising a family with his wife, Janette. After Kubrick's death, he returned to his native land. He lives in Cassino, Italy.

Filippo Ulivieri was born 1977 and is Italy’s leading expert on Stanley Kubrick. Since 1999, he has run the website archiviokubrick.it, a database of factual information about the life and work of Stanley Kubrick. His research on 2001: A Space Odyssey, A Clockwork Orange, Kubrick’s unrealized films, and the myths surrounding his public image have been presented in several international conferences and published in Italian and English. He has adapted Stanley Kubrick and Me for the screen as S Is for Stanley (Alex Infascelli, 2015), winner of the David di Donatello award for Best Documentary Feature. His most recent book is 2001 between Kubrick and Clarke: The Genesis, Making, and Authorship of a Masterpiece.

Matthew Modine is an award-winning actor who has worked with many of the film industry’s most acclaimed directors. He has starred in movies from Alan Parker's Birdy, Robert Altman's Shortcuts (for which he won a Golden Globe Award), and Stanley Kubrick’s Full Metal Jacket (in the iconic role of Private Joker) to the Sicario sequel Soldado and the shark thriller 47 Meters Down. He is currently starring in the Netflix original series Stranger Things, for which he won the 2017 SAG Award for Outstanding Performance by an Ensemble. He also directed the award-winning short film Super Sex, which premiered at the Tribeca Film Festival, and has recently mounted three features: The Rocking Horseman, The Horror, and Beyond the Horizon.

"A weird, revealing delight . . . The accretion of details about this seemingly salt–of-the-earth working stiff and the eccentric artistic genius who paid him creates an irresistible picture of friendship, loyalty, and artistic temperament. . . . I enjoyed every word." —The New York Times Book Review

"As good an insider's view of middle- to late-period Kubrick as there is. . . . The book is funny and casual throughout. Of special interest are D'Alessandro's set notes, revealing, for example, that the cat lady room in A Clockwork Orange figured two decades later in Eyes Wide Shut." —Kirkus Reviews

“Utterly charming . . . [A] sweet and sentimental record of service to a creative genius . . . the book's invitingly conversational tone and descriptions paint an all-too-human portrait of a cloistered artist and ardent workaholic who expected everything and more from his employees and returned their devotion in kind.” —Publishers Weekly

"Through detailed anecdotes and tender accounts of life both on location and off, D'Alessandro sheds light behind the scenes of Kubrick's famously controlled sets and offers a unique portrait of the man himself." —Vice

"Stanley Kubrick and Me is perhaps the most important book ever written about Kubrick. It offers a portrait full of warmth, a touching memoir about the filmmaker, and at the same time it clears away all the stupid and crazy stuff about him that has plagued his image for years."—L’Unità

"D’Alessandro tells about a generous man, caring, perfectionist in his work, demanding in every aspect of the daily life. [...] It is a delightful book indeed: gentle and delicate as the summer that slowly says goodbye and vanishes." —La Stampa

"This memoir is exquisite, not to be missed." —Il Sole 24 Ore

"This is a story of genius and sweetness. It is an exciting book because it gives tons of detail about how Kubrick’s films were made, but it is also, and surprisingly, a sort of sentimental novel, beautifully written . . . a story of warm feelings—an oblique tale of two souls in which genius and humility are knit together and sometimes exchange places."—Radio Capital

"Here is a perfect match, here are two men who greatly admired each other and are happy to show it. [...] Stanley Kubrick and Emilio D’Alessandro, the visionary genius and the man who drove him anywhere, the imaginative director and his factotum, the art of thinking and the craft of doing, the mind and the body. They're like two happy kids at a birthday party."—Il Venerdì di Repubblica

"His portrayal of Kubrick is heartfelt, yet detached. There is a controlled admiration running through the pages, a need to understand who Kubrick really was beyond the legend, and above all without the usual tales that depict him as someone who was furiously, obsessively, and crazily cut off from the world. [...] Emilio was the ideal character in a unique story, told with devotion, respect, and freedom. Here, there are no unnecessary frills and no implausible details that often damage many accounts of extraordinary encounters."—Il Venerdì di Repubblica

"At last, a new book that for the first time seems to succeed in capturing the real Kubrick, the everyday man—who is indivisible from the artist, because thanks to the book you see how Kubrick was always “on.” always working, focused on his job. . . It is a very humorous book, and a touching one, even moving: something that is indeed a paradox for an artist who kept tears constantly away in his films. [...] The book offers relaxing reading for any Kubrick fan who has tried for years to distinguish the truth from the Internet bullshit. After reading the book, I think I love Emilio, and Stanley as well." —Globalist