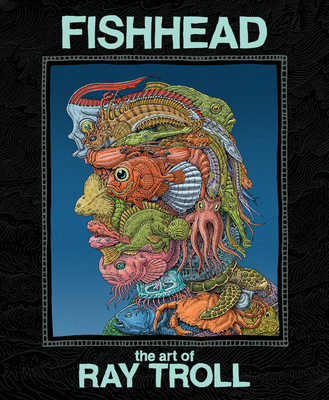 Ray Troll's new book Fishhead is an exuberant plunge into the fantastic realities of sea creatures and prehistoric animals that come alive with scientific realism and his quirky sense of humor. For more than four decades, this celebrated Alaskan artist has been luring, hooking, and landing fans around the world with his mesmerizing renditions of the inhabitants of Planet Ocean, past and present. His art is featured in the nation's major natural history museums including the Smithsonian, in galleries, and in books, as well as on immensely popular T-shirts. Part natural history adventure and part underground comic, his work depicts beautiful and accurately drawn fish of all kinds, Northwest Coast totems, Freud and Darwin, fossils, resurrections of extinct animals, and much more. Troll's art is deeply thought provoking (pun intended) but also simply fun to experience and never far from an inside joke he seems to be sharing with everyone. Some of his pieces are amusingly tongue-in-cheek, others are beautifully surrealistic and evocative of the interconnectedness of life on Earth, and his grandly composed major pieces are brilliant, inspiring panoramas of the natural world. His whimsy and attention to detail in his renderings of fish and other aquatic creatures has earned him a devoted following of scientists, anglers, and people who just like a good laugh. Welcome to the fishy, funny, inspiring art of Ray Troll.