The Least Among Them: 29 Players, Their Brief Moments in the Big Leagues, and a Unique History of the New York Yankees (Paperback) 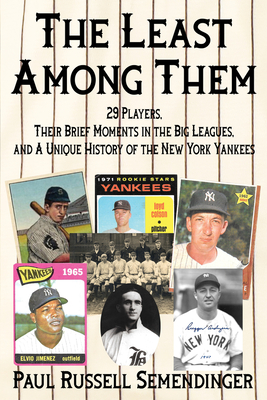 "(The Least Among Them) is the ultimate insider book." – Marty Appel

"This charming and meticulously researched book will remind you of baseball’s power to change and enrich lives far beyond the diamond." – Jonathan Eig

The Least Among Them is a most special baseball book that looks at the New York Yankees history in an original, unique, and never before written manner. Throughout their history, the New York Yankees have been defined by the legends and the successes of their most famous players. But, as part of their long history, the Yankees have also fielded players that have become lost to history. This book is those players’ story, telling the unique histories of the men whose entire major league baseball career lasted but a single game with that game being played as a New York Yankee. While these players may be forgotten, their stories are compelling. Filled with a unique Yankee history, single game stats, and a love of baseball, The Least Among Them tells the story of baseball's most successful franchise in an entirely new way.

Dr. Paul Semendinger, is widely known for his deep knowledge of the history of baseball, specifically the New York Yankees. He is a member of the Internet Baseball Writers Association of America (IBWAA) and a regular contributor to their exclusive newsletter, "Here's The Pitch." Paul operates, writes for, and is the Editor-in-Chief of the extremely successful Yankees blog, Start Spreading the News. He is a guest host on several sports radio shows and podcasts. Paul still pitches in a NJ baseball league and holds out hope that the Yankees will call on him to pitch for the big club.

"[T]he ultimate insider book." —Marty Appel, author of Pinstripe Empire: The New York Yankees from Before the Babe to After the Boss

"This charming and meticulously researched book will remind you of baseball’s power to change and enrich lives far beyond the diamond." —Jonathan Eig, New York Times best-selling author of Luckiest Man, Opening Day, and Ali: A Life

"Unique stories worthy of engaging our imaginations and tugging on our emotions." —Robert Skead, Author of Safe at Home

"The Least Among Them is a delightful journey into the past of baseball's most hallowed franchise." —Barry Sparks, Author of Frank "Home Run" Baker: World Series Hero and Hall of Famer

"Every guy who spends just one day on an MLB team's 25-man roster represents the dreams of tens of thousands of boys. With meticulous research and clever storytelling, Paul Semendinger pays homage to the 29 lucky ones who were able to live out that dream for one afternoon in Pinstripes. The Least Among Them promises to be the best among choices for Yankees' fans looking to add to their baseball libraries."
David Ostrowsky, author of Pro Sports in 1993

"The most impressive scholarship on the Yankees I have read." —Dr. Rock Positano and John Positano, Award-winning authors of Dinner With DiMaggio

"A great read for anyone who has ever dreamed of playing in the big leagues, if only for just one game." —Chris Donnelly, Author of Doc, Donnie, the Kid, and Billy Brawl: How the 1985 Mets and Yankees Fought For New York’s Baseball Soul

"The Least Among Them is a treasure trove of fascinating stories about lesser known Yankees, lovingly researched and crafted by writer/historian Paul Semendinger. A must-read for Yankee fans and the baseball cognoscenti." —Jon Leonoudakis, Baseball Documentarian

"Most of us can only dream of what these people did, and the details Paul brings to each story brings them all to life." —Rich Klein, 3-Time SABR National Trivia Champion, 40 Years on writing about the Sports Collecting Hobby

"Make room on your reading list for this one. You'll come back to it again and again." —Dan Joseph, Author of Last Ride of the Iron Horse: How Lou Gehrig Fought ALS to Play One Last Championship Season

"This book is a wonderful read for any historian or fan of the game, and a must-have if your team is the Yankees." —Lyle Spatz, Chairman of SABR's Baseball Records Committee and the author of New York Yankees Openers, Yankees Coming...Yankees Going