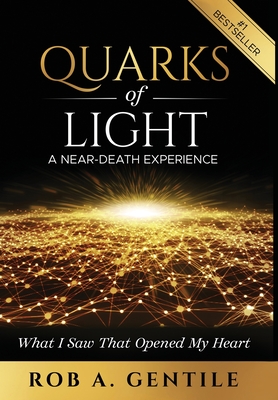 At the age of 56, Rob A. Gentile had a massive heart attack followed by a profound near-death experience. On his journey to a heart transplant, he was close to death again and entered the Ethereal a second time. He found himself inside a shapeless, formless vacuum of unending and infinite vastness. He was everywhere at once, scattered across a timeless expanse and connected to the wisdom of the universe-all of it without words.

He saw and simultaneously became part of a gigantic interactive web of twinkling lights covering the Earth and stretching into infinity. Curiously, some parts of the web were brighter, some dim, and some completely dark. He later came to believe that this web represents a network that binds us all and is built upon quarks-the smallest elements of matter, and which are made of light.

While in the Ethereal, he understood that each quark of light symbolized a life. He realized that if he hurt himself, he hurt everything connected to him, but if he loved, the light would spread. Rob also saw his daughter with special needs, perfect, whole, and radiant.

The most important message he received was of unity, oneness, and our real identity.

In Quarks of Light, Rob shares his journey and provides a roadmap for overcoming adversity, staying in spirit, and connecting to the Universal language of love and light.