The Political Seduction of the Church: How Millions Of American Christians Have Confused Politics with the Gospel (Paperback) 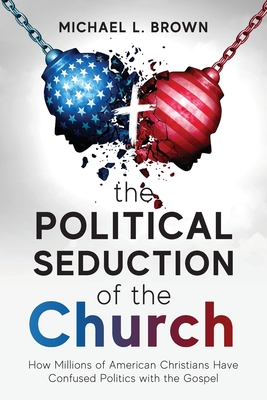 Was the relationship between evangelical Christians and Donald Trump a match made in heaven or a marriage made with hell? Did Christian conservatives trade their reputation for a seat at the political table, or is this just a false accusation from the Trump-hating, Christian-bashing, leftist media? And how did Donald Trump go from unlikely presidential candidate to superhero to political savior in the eyes of his supporters?
In this penetrating, carefully documented, no-holds barred book, biblical scholar and cultural commentator Dr. Michael Brown explains how millions of sincere Christians wrapped the gospel in the American flag and got so caught up in partisan politics that President Trump, almost more than Jesus, became the rallying point of their faith.
While rejecting the exaggerated, caricatured claims of the left, in which Trump supporters were branded white supremacists and insurrectionists, Brown, himself a two-time Trump voter, spells out the dangers of Christian nationalism, rejects the idea that the Church is called to take over society, and lays out a strategy for healthy political and cultural engagement.
Brown also delves into the flood of failed, pro-Trump prophecies that swept through the Charismatic church during the 2020 elections, examining the genesis of false prophecy and evaluating the degree to which Christian conservatives bought into Q-Anon conspiracy theories.An extremely timely read, especially right before the 2022 mid-terms and the launching of the 2024 campaigns.
"I knew this would be a good book because that is what Dr. Michael Brown does. But I was not prepared for how good this book is. Good? This book is tremendous. I cannot imagine a more timely and more knowledgeable and more urgently needed book at this crucial moment in our nation's history. Spread this word to every American who loves our country "Dr. R. T. Kendall, Author of Prophetic Integrity, Former Minister, Westminster Chapel
Michael L. Brown (Ph.D., New York University) is the host of the daily, nationally syndicated radio show The Line of Fire where he serves as your voice for moral sanity and spiritual clarity. He is the author of more than 40 books and over 2,000 op-ed pieces and is the founder and president of AskDrBrown Ministries. Dr. Brown has preached throughout America and around the world and has served as a visiting or adjunct professor at seven leading seminaries.