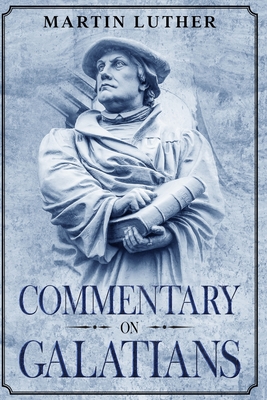 This annotated edition of "Commentary on Galatians" includes an extra appendix (in addition to the two already included in the original book) which provides an interesting overview of:

In "Commentary on Galatians," Martin Luther expounds Paul's epistle with an insight, power, and depth of emotion which is sorely lacking in modern commentaries. From the very first page of this book, Luther cuts to the heart of the epistle-the doctrine of justification-in the way that only he can. His bold words and plain-sense interpretations result in a work filled with much of the same force and passion that characterized the epistle itself. The grace of God and the love of Jesus Christ cling to every word like the scent of a precious perfume. The theology expounded in this book is the very essence of the gospel as understood by the one who "rediscovered" the all-important doctrines of faith and grace. Readers will find in these pages a plain declaration of the power and wisdom of God.

A German professor of theology in the 1500's, Martin Luther is considered to be the father of the Protestant Reformation. In 1517, Luther wrote his iconic "95 Theses" in opposition to the sale of indulgences as a "paid for" forgiveness of sin. Thanks to the invention of the printing press, Luther's points of contention, as explained in the "theses," spread across and impacted Europe in record time. When the pope and Emperor Charles V urged Martin Luther to recant, he refused. As a result, he was excommunicated and declared to be an outlaw. Today he is remembered for sparking the Protestant Reformation, making the Bible accessible to the common people through his German translation, rediscovering the great truth of salvation through faith alone, setting an example of marriage for the clergy, and founding the Lutheran Church (among other accomplishments).This edition of Martin Luther's classic includes the introduction by Theodore Graebner.