Prairie Fire: The Politics Of Revolutionary Anti-Imperialism - The Political Statement Of The Weather Underground (Reprint From The (Paperback) 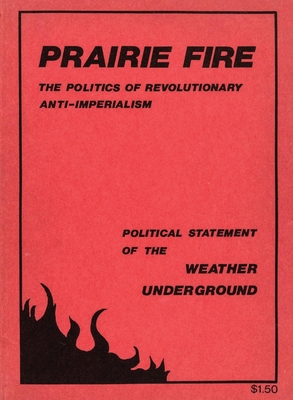 The original Weather Underground manifesto, in its original layout.

Prairie Fire was a 188-page political manifesto published by the Weather Underground in 1974, articulating the radical splinter group's ideology, and endorsing revolutionary violence.

"Prairie Fire" was distributed in radical bookstores, food coops, headshops, on college campuses and many other places that movement activists met. It was met with a combination of strong emotions throughout the Left. Ultimately, the ideological arguments articulated in "Prairie Fire" led to a new split in the Weather Underground, with some gravitating toward the "Prairie Fire Collective," which favored mass-based, above-ground revolutionary politics, and the "May 19th Communist Organization," which remained underground and pulled off the infamous Brinks robbery in 1981.

In 1974 when "Prairie Fire" was written the Weather Underground had realized the shortcoming of there underground tactics in the previously stated sense. So "Prairie Fire", called for the creation of both mass and clandestine, or underground, organizations. The clandestine organizations would be in charge of the development and early creation of a people's militia, as well as carrying out previous underground tactics, and raising consciousness. That mass organization would support and encourage armed action to the mass of the public, in a more legitimized fashion. Under this ideology The Weather Underground could facilitate a far larger mass fallowing, while still advocating for a violent militant revolution.

The name for the manifesto was derived from the writings of Chinese Communist revolutionary, Mao Zedong. In his "Little Red Book," he wrote, "a single spark can set a prairie fire" as an analogy for revolution. The manifesto encourages a mix of mass-organizing and clandestine revolutionary violence. "Never disassociate mass struggle from revolutionary violence," the author's argued. "To leave people unprepared to fight the state," they said, "is to seriously mislead them about the inevitable nature of what lies ahead."

Abbie Hoffman publicly praised Prairie Fire and believed every American should be given a copy. The manifesto's influence initiated the formation of the Prairie Fire Organizing Committee in several American cities. Hundreds of above-ground activists helped further the new political vision of the Weather Underground.

Essentially, after the 1969 failure of the Days of Rage to involve thousands of youth in massive street fighting, Weather renounced most of the Left and decided to operate as an isolated underground group. The decision to build only an underground group eventually caused the Weather Underground to lose sight of its commitment to mass struggle and made future alliances with the mass movement difficult and tenuous.

By 1974, Weather had recognized this shortcoming and in Prairie Fire detailed a different strategy for the 1970s which demanded both mass and clandestine organizations. The role of the clandestine organization would be to build the "consciousness of action" and prepare the way for the development of a people's militia. Concurrently, the role of the mass movement (i.e., above-ground Prairie Fire collective) would include support for, and encouragement of, armed action. Such an alliance would, according to Weather, "help create the 'sea' for the guerrillas to swim in".

The Prairie Fire Collective faction started to surrender to the authorities from the late 1970s to the early 1980s. The remaining Weather Underground members continued to attack U.S. institutions.

This is the complete text of Prairie Fire, in its original layout.