If the Light Escapes: A Braving the Light Novel (Paperback) 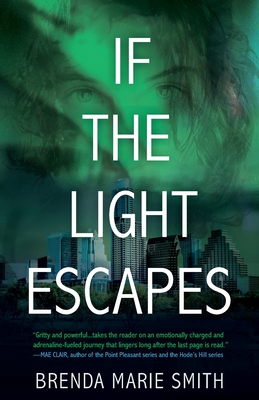 The standalone sequel to IF DARKNESS TAKES US

A solar electromagnetic pulse has fried the US grid. Now, northern lights are in Texas-three thousand miles farther south than where they belong. The universe won't stop screwing with eighteen-year-old Keno Simms. All that's left for him and his broken family is farming their Austin subdivision, trying to eke out a living on poor soil in the scorching heat. Keno's one solace is his love for Alma, who has her own secret sorrows. When he gets her pregnant, he vows to keep her alive no matter what. Yet armed marauders and nature itself collude against him, forcing him to make choices that rip at his conscience. If the Light Escapes is post-apocalyptic science fiction set in a near-future reality, a coming-of-age story told in the voice of a heroic teen who's forced into manhood too soon.

"Gritty and powerful... takes the reader on an emotionally charged and adrenaline-fueled journey that lingers long after the last page is read."

-Mae Clair, author of the Point Pleasant series and the Hode's Hill series

"Brenda Marie Smith stuns a gain with the breathtaking sequel to her debut. With her skill for detail and character, Smith captivates us with Keno's kindness and humanity while also exploring the capacity for violence that lurks within all of us."

"IF THE LIGHT ESCAPES is a rich coming-of-age story about the legacy of family, infused with hopefulness and humanity."

-Laura Creedle, author of THE LOVE LETTERS OF ABELARD AND LILY

BRENDA MARIE SMITH lived off the grid for many years in a farming collective where her sons were delivered by midwives. She's done community activism, managed student housing co-ops, produced concerts to raise money for causes, done massive quantities of bookkeeping, and raised a small herd of teenage boys. Brenda is attracted to stories where everyday characters transcend their limitations to find their inner heroism. She and her husband reside in a grid-connected, solar-powered home in South Austin, Texas. They have more grown kids and grandkids than they can count.