Rhialto the Marvellous (in Russian) (Paperback) 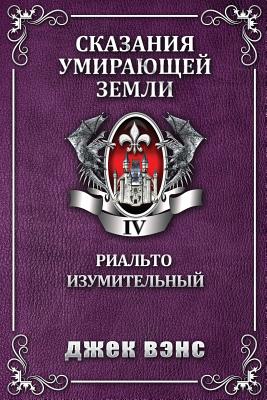 Jack Vance is one of the most remarkable talents to ever grace the world of science fiction. His unique, stylish voice has been beloved by generations of readers. One of his enduring classics is his Mazirian the Magician (previously titled The Dying Earth), and its sequels--a fascinating, baroque tale set on a far-future Earth, under a giant red sun that is soon to go out forever. Rhialto the Marvellous contains three linked novellas about the adventures of the wizard Rhialto across the decadent landscape of the Dying Earth, under its swollen red sun.

Jack (John Holbrook) Vance (August 28, 1916, San Francisco - May 26, 2013, Oakland) was a famous American mystery, fantasy and science fiction author. Most of his work has been published under the name Jack Vance. Vance's stories written in the 1940s and 1950s cover many science fiction themes, with a tendency to emphasis on mysterious and biological themes (ESP, genetics, brain parasites, body switching, other dimensions, cultures) rather than technical ones. By the 1960s, Vance had developed a futuristic setting which he came to call the "Gaean Reach." Thereafter, all his science fiction was, more or less explicitly, set therein. The Gaean Reach is loose and ever expanding. Each planet has its own history, state of development and culture. Within the Reach conditions tend to be peaceable and commerce tends to dominate. At the edges of the Reach, out in the lawless "Beyond," conditions are sometimes, but not always, less secure. Alexander Feht (born in 1961 near the Siberian city of Novosibirsk), a Russian American poet, translator, and music composer, spent more than 15 years preparing and polishing his Russian translations of Jack Vance's masterpieces. He personally discussed with Jack Vance some daunting difficulties involved in translation of Vance's rhythmical and complex prose, whose mesmerizing character and timeless nobility are often lost in poor translations.