The Outside Man (A Matt Drake Novel #2) (Hardcover) 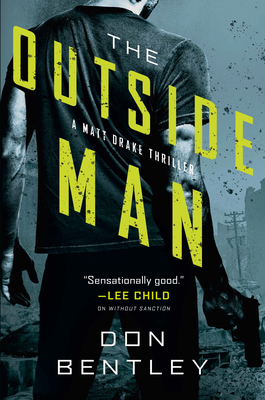 This is book number 2 in the A Matt Drake Novel series.

The fight for freedom has sent Matt Drake to some of the world's most dangerous spots. This time the war is coming to his front door.

Broad daylight on an Austin, Texas, street and DIA operative Matt Drake is fighting for his life against a highly trained team of assassins. Who are they? Why do they want him dead? How will he protect those closest to him?

The answers will take him into some of the most dangerous spots in the Middle East and will put him in the clutches of an old foe known simply as the Devil. It's a world of double crosses, with no boundaries between the guilty and the innocent. It will take all of Drake's wiles to get out alive.

Don Bentley spent a decade as an Army Apache helicopter pilot, and while deployed in Afghanistan was awarded the Bronze Star Medal and the Air Medal with "V" device for valor. Following his time in the military, Don worked as an FBI special agent focusing on foreign intelligence and counterintelligence and was a Special Weapons and Tactics (SWAT) team member.

"[D]evoted action fans, will be right at home. All can benefit from Drake's insider tips: get military pepper spray if you can; the commercial stuff is a powder puff."—Booklist

“Bentley adds brains to the traditional brawn of yesteryear in crafting a thinking man's shoot-'em-up that keeps us on the edge of our seat from beginning to end.”—The Providence Journal

"[A] bloodied and world-weary Matt Drake has returned to try to save the world...The Outside Man...reinforc[es] Bentley’s status as a fresh and worthy entrant into the top tier of military-political thriller authors such as Brad Thor, the late Vince Flynn, James Haig and others."—BookTrib

“The Outside Man is among the rare class of sequels that outshine their predecessors….Bentley possesses that unique combination of storytelling ability and personal life experience that lends an air of realism which cannot be faked. For fans of writers like Simon Gervais, Mark Greaney, and Jack Carr, Don Bentley’s The Outside Man is sure to be a new favorite.”—Coffee or Die Magazine