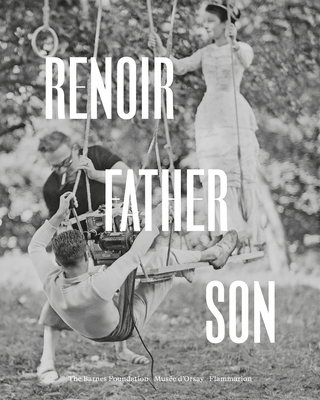 Beloved Impressionist painter Pierre-Auguste Renoir left a vibrant legacy that influenced the life and films of his son, the acclaimed director Jean Renoir.

The Impressionist paintings of Pierre-Auguste Renoir (1841‒1919) are characterized by portraits and lively episodes from daily life, portrayed in rich color with masterful framing and vibrant light. These joyful scenes, often set outdoors, accompanied and influenced the life and work of his son, filmmaker Jean Renoir (1894‒1979), who Orson Welles described as "the greatest of all directors."

This catalogue--along with the traveling exhibition it accompanies--demonstrates the rich and fascinating dialogue between father and son, and retraces chapters of Jean's production through the lens of his father's work. And while Pierre-Auguste Renoir's artistic practice and creative universe influenced Jean's art, Jean's films shed new light on his father's paintings.

Focusing on core themes in both artists' works, such as their vision and recreation of Paris, this volume examines Jean's path to becoming a prominent international filmmaker, bringing together paintings, drawings, films, costumes, and photos--as well as the ceramics he made before he turned to cinema. Contributions from the Barnes Foundation--with its collection of 181 works by Pierre-Auguste Renoir along with pottery by Jean Renoir--the Musée d'Orsay, and the Cinémathèque Française provide in-depth insight into this complex, fruitful relationship between painting and cinema. The exhibition opens at the Barnes from May 6‒September 3, 2018 and travels to the Musée d'Orsay in Paris from November 5, 2018‒January 27, 2019.

Chief curator Sylvie Patry is a specialist in impressionist and post-impressionist painting. She is Deputy Director for Curatorial Affairs and Collections at the Musée d'Orsay in Paris--where she previously served as curator for more than a decade--and Consulting Curator at the Barnes Foundation in Philadelphia. Patry also previously served as Deputy Director for Collections and Exhibitions and Gund Family Chief Curator at the Barnes Foundation. She co-organized the Renoir: Father and Son / Painting and Cinema exhibition for the Barnes with the Musée d'Orsay, along with the participation of the Cinémathèque Française in Paris. She has authored and contributed to numerous books, essays, and exhibition catalogs and has lectured extensively around the world on the topic of nineteenth-century French painting and taught at the École du Louvre, Paris. Patry has published extensively on Pierre-Auguste Renoir, in particular on his late years and on Renoir in the twentieth century.