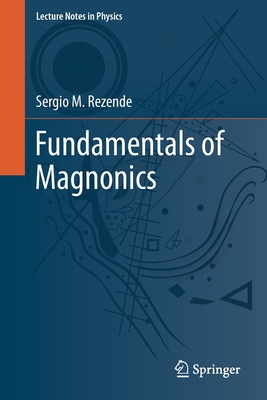 Fundamentals of Magnonics is a textbook for beginning graduate students in the areas of magnetism and spintronics. The level of presentation assumes only basic knowledge of the origin of magnetism and electromagnetism, and quantum mechanics. The book utilizes elementary mathematical derivations, aimed mainly at explaining the physical concepts involved in the phenomena studied and enabling a deeper understanding of the experiments presented. Key topics include the basic phenomena of ferromagnetic resonance in bulk materials and thin films, semi-classical theory of spin waves, quantum theory of spin waves and magnons, magnons in antiferromagnets, parametric excitation of magnons, nonlinear and chaotic phenomena, Bose-Einstein condensation of magnons, and magnon spintronics. Featuring end-of-chapter problem sets accompanied by extensive contemporary and historical references, this book provides the essential tools for any graduate or advanced undergraduate-level course of studies on the emerging field of magnonics.

Sergio Machado Rezende graduated in Electrical Engineering in Rio de Janeiro in 1963 and received his MSc and PhD degrees from the Massachusetts Institute of Technology, both in Electrical Engineering-Materials Science. He was one of the founders and first chairman of the Physics Department of the Federal University of Pernambuco (UFPE) (1972 - 1976) in Recife, Brazil, where he is currently Full Professor. He has held two appointments as Visiting Professor at the University of California at Santa Barbara (1975-1976 and 1982-1984). His publication record encompasses over 270 scientific papers in international journals on dynamic excitation phenomena in magnetic materials, magnetic nano-structures and spintronics. His scientific activities have evolved uninterrupted alongside his numerous positions in science management; namely as Dean of the Center for Exact Sciences of UFPE (1984-1988), Scientific Director of the Pernambuco Science Foundation (1990-1993), Secretary for Science and Technology of Pernambuco (1995-1998), President of FINEP, the main federal agency for funding of S&T in Brazil (2003-2005) and Minister for Science and Technology of Brazil (2005-2010). He has supervised 40 MSc and PhD students, and is a long-standing member of several scientific societies and recipient of several prizes and awards in Brazil and abroad.