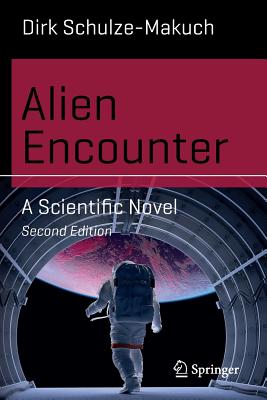 It has been nearly 100 years since the Apollo moon landings, when Jack and Vladimir, two astronauts on a mission to Venus, discover a mysterious void related to indigenous life on the planet. Subsequently more voids are detected on Earth, Mars, Titan, and, quite ominously, inside a planetoid emerging from the Kuiper belt.

Jack is sent to investigate the voids in the Solar System and intercept the planetoid - which, as becomes increasingly clear, is inhabited by alien life forms. Jack and his crew will have little time to understand their alien biochemistry, abilities, behavior patterns, resilience, and technology, but also how these life forms relate to the voids.

Humankind's first encounter with these exotic life forms couldn't be more fateful, becoming a race against time to save life on Earth and to reveal the true nature of the voids, which seem to be intrinsically related to life and the universe itself. In this novel, the author combines many topics related to state-of-the-art research in the field of astrobiology with fictional elements to produce a thrilling page turner.

This new version significantly develops the astrobiological denouement of the plot and features an extensive non-technical appendix where the underlying science is presented and discussed.

From the reviews of the first edition (Voids of Eternity: Alien Encounter)

Here's a thrilling yarn in the best hard SF tradition of Asimov, James Hogan, and Ben Bova, written by a scientist who knows all about the possibilities of life in the solar system and beyond. Dirk Schulze-Makuch weaves into his book all the astrobiological themes he's worked on in recent years -- speculation about creatures in the atmosphere of Venus and on and under the surface of Mars and Titan -- together with some well-informed Eastern philosophy and a cracking good space battle. A great first novel from a rising talent. Highly recommended. David Darling, on amazon.com, 2009

The research interests of Dr. Schulze-Makuch, currently a professor at Washington State University, focus on evolutionary adaptation strategies of organisms in their natural environment, particularly extreme environments such as found on other planetary bodies. Dirk Schulze-Makuch is best known for his publications on extraterrestrial life, being coauthor of three books on the topic: We Are Not Alone: Why We Have Already Found Extraterrestrial Life (2010), Cosmic Biology: How Life could Evolve on Other Worlds (2010), and Life in the Universe: Expectations and Constraints (2004). In 2011 he published with Paul Davies A One Way Mission to Mars: Colonizing the Red Planet and in 2012 with David Darling Megacatastrophes Nine Strange Ways the World Could End.

Dirk Schulze-Makuch is a professor at the Technical University Berlin, Germany, and an adjunct professor at Arizona State University and Washington State University. He is interested in all aspects of astrobiology, but particularly whether other planets and moons inside and outside our Solar System could serve as a potential habitat for life. He received the Friedrich-Wilhelm Bessel Award from the Humboldt Foundation for extraordinary achievements in theoretical biology in 2010. He is best known for his publications on extraterrestrial life, which span nearly 200 scientific articles and several books such as Cosmic Biology: How Life Could Evolve on other Worlds (2011), Megacatastrophes! Nine Strange Ways the World Could End (2012), The Extraterrestrial Encyclopedia (2016) and The Cosmic Zoo: Complex Life on Many Worlds (2017), as well as three editions of Life in the Universe: Expectations and Constraints (2004, 2008 and 2018).