On the Shores of Titan's Farthest Sea: A Scientific Novel (Science and Fiction) (Paperback) 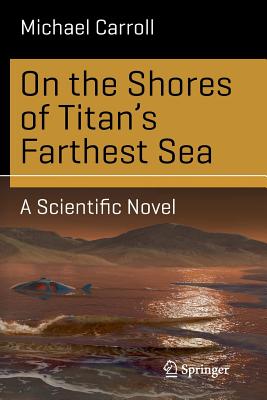 Titan is practically a planet in its own right, with a diameter similar to that of Mercury, methane rainstorms, organic soot and ethane seas. All of the most detailed knowledge on the moon's geology, volcanology, meteorology, marine sciences and chemistry are gathered together here to paint a factually accurate hypothetical future of early human colonization on this strange world.

The views from Titan's Mayda Outpost are spectacular, but all is not well at the moon's remote science base. On the shore of a methane sea beneath glowering skies, atmospherics researcher Abigail Marco finds herself in the middle of murder, piracy and colleagues who seem to be seeing sea monsters and dead people from the past. On the Shores of Titan's Farthest Sea provides thrills, excitement and mystery - couched in the latest science - on one of the Solar System's most bizarre worlds, Saturn's huge moon Titan.

This riveting story, set against a plausibly well integrated interplanetary space, carries us along with its bright and interesting characters. We feel absolutely transported to a hauntingly beautiful and alien Titan through Carroll's masterful weaving of art and science. - Jani Radebaugh, Professor of Planetary Sciences, Titan dune expert, BYU

Michael Carroll's new novel On the Shores of Titan's Farthest Sea (Springer) is a gripping, good-vs-evil tale that sparkles with imagination. It's set on the shores of Kraken Mare, the vast methane sea found high in the northern latitudes of Saturn's moon, Titan, in a future when humanity has spread throughout the solar system. The villains are wicked, the heroes are scientists (Thanks, Mike ), the story is convincing, the dialogue snappy, and the scenery is right out of our catalog of findings on this cold, hazy and alien world.

If you fancy skipping forward 250 years and checking out how humankind might be navigating the very geography and landforms we have uncovered in our years touring Saturn, this book is for you --Carolyn Porco, leader of the Cassini Imaging Science team and the Director of the Cassini Imaging Central Laboratory for Operations (CICLOPS) at the Space Science Institute in Boulder, Colorado

Award-winning space artist and science writer Michael Carroll has written 26 books, ranging from children's devotionals to titles that include Drifting on Alien Winds: Exploring the Skies and Weather of Other Worlds and Alien Seas: Oceans in Space, both published by Springer. He has done art for NASA, the Jet Propulsion Laboratory, and dozens of book and magazine publishers internationally. Mike is a Fellow and founding member of the International Association for the Astronomical Arts. One of his paintings is resting at the north pole of Mars - in digital form - aboard the Phoenix lander. He is recipient of the Lucien Rudaux Award for lifetime achievement in the astronomical arts, and the American Astronomical Society's Division of Planetary Sciences Jonathan Eberhart Award for the year's best planetary science feature article.