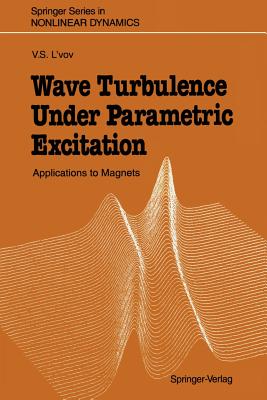 WAVE TURBULENCE is a state of a system of many simultaneously excited and interacting waves characterized by an energy distribution which is not in any sense close to thermodynamic equilibrium. Such situations in a choppy sea, in a hot plasma, in dielectrics under arise, for example, a powerful laser beam, in magnets placed in a strong microwave field, etc. Among the great variety of physical situations in which wave turbulence arises, it is possible to select two large limiting groups which allow a detailed analysis. The first is fully developed wave turbulence arising when energy pumping and dissipation have essentially different space scales. In this case there is a wide power spectrum of turbulence. This type of turbulence is described in detail e. g. in Zakharov et al. 1 In the second limiting case the scales in which energy pumping and dissipation occur are the same. As a rule, in this case a narrow, almost singular spectrum of turbulence appears which is concentrated near surfaces, curves or even points in k-space. One of the most important, widely investigated and instructive examples of this kind of turbulence is parametric wave turbulence appearing as a result of the evolution of a parametric instability of waves in media under strong external periodic modulation (laser beam, microwave electromagnetic field, etc. ). The present book deals with parametric wave turbulence.