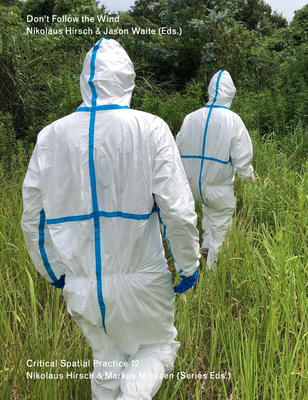 
The twelfth volume of the Critical Spatial Practices series focuses on “Don’t Follow the Wind,” the acclaimed collaborative project situated in Fukushima’s radioactive exclusion zone. The book explores the long-term environmental crisis in the coastal Japanese region through this ongoing, inaccessible exhibition, which maintains traces of human presence amid the fallout of the March 2011 nuclear reactor meltdown that displaced entire towns. What can art do in a continuing catastrophe when destruction and contamination have made living impossible?

The exhibition is located inside the exclusion zone, an evacuated radioactive area established after the nuclear disaster that forcibly separated residents from their homes, land, and community. In cooperation with former residents, participating artists installed newly commissioned works at sites in the exclusion zone. Although the exhibition opened in March 2015, the zone is still inaccessible to the public—the exhibition, like the radiation, is virtually invisible. The exhibition can only be viewed when restrictions are lifted and people are permitted to return. This might take several years or decades—a period that could extend beyond our lifetime. While nuclear contamination has displaced and ruptured communities, new temporary and translocal formations have emerged among the residents who have lent their sites, other former residents collaborating on the project, and the artists, curators, and cultural workers.

Nikolaus Hirsch is an architect, curator, editor, and educator. He is the director of CIVA in Brussels and was the Dean of Städelschule and Director of Portikus in Frankfurt. He is the author of the books On Boundaries (2007), Institution Building (2009), Cybermohalla Hub (2012), and co-editor of the Critical Spatial Practice series at Sternberg Press and co-founder of e-flux architecture.

Jason Waite is an independent curator and cultural worker focused on forms of practice producing agency, and has recently been working in sites of crisis amidst the detritus of capitalism, looking for tools and radical imaginaries for different ways of living and working together. He holds an M.A. in Art and Politics from Goldsmiths College, London and was a 2012-2013 Helen Rubinstein Curatorial Fellow at the Whitney Museum Independent Study Program, New York. He is currently a doctoral candidate in Contemporary Art History and Theory at the University of Oxford in the Ruskin School of Art and Christ Church.