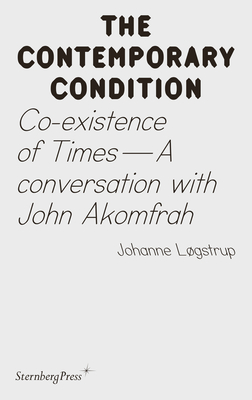 A conversation with filmmaker and artist John Akomfrah, exploring how his work with montage can be understood to articulate contemporaneity in sensuous ways.

Taking the form of a conversation with filmmaker and artist John Akomfrah, this book sets out to explore how Akomfrah's work with montage can be understood to articulate contemporaneity in sensuous ways. In multilayered video installations, sequences of images are forced into the same time and space, allowing the viewer to experience connections in her/his/their present. With examples from many of his key works, topics discussed include untold histories and the diaspora, migration, and "the enigma of arrival." Akomfrah defines his way of working with montage not only as a technique but as an ethic, an ontology in which differences are brought together.

Johanne Løgstrup is a curator and a PhD student in the Department of Aesthetics and Culture, Aarhus University, Denmark, where she is part of the research project The Contemporary Condition. Previously she cofounded the organization publik, ran the project space bureau public from 2012 to 2014 together with curator Katarina Stenbeck, and has worked as a curator at Nikolaj Kunsthal in Copenhagen.

John Akomfrah is an artist and filmmaker, who was a founding member of the influential Black Audio Film Collective, which started in London in 1982. Since 1998 he has worked together with other founding members Lina Gopaul and David Lawson in the production collective Smoking Dogs Films. Together, they have produced large works such as Handsworth Songs (1986), The Unfinished Conversation (2012), Peripeteia (2012), Mnemosyne (2010), Vertigo Sea (2015), and Purple (2017).