Bible History of the Negro (Paperback) 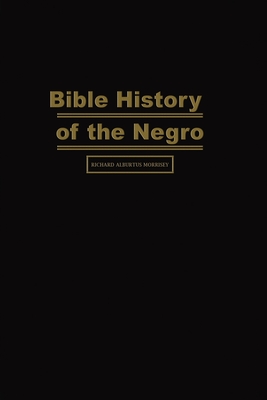 Richard A. Morrisey was a first-rate African-American biblical scholar-a valedictorian of Livingston College and a Doctor of Divinity, president of the Greeneville College, and the pastor of a number of churches in the American South and in Pennsylvania.

Morrisey published "Bible History of the Negro," with the hope of inspiring a greater desire to read the Bible" which he describes as giving "the Negro a place among the foremost races of the world, in wealth, in education, in honor and in religion-a history to which every member of the race may point with great pride and profound gratitude to Almighty God today; for the best way to judge the future of any people is by the past."

-BATHSHEBA, THE QUEEN OF SHEBA,

-THE WIDOW OF ZAREPHATH,

-ONE OF THE TWELVE DISCIPLES,

-MEMBERS OF THE NEW TESTAMENT CHURCH,

-NIMROD FOUNDER OF THE BABYLONIAN EMPIRE,

-WORKMEN OF THE TEMPLE OF SOLOMON,

-PHILIP AND THE ETHIOPIAN,

In debunking Noah's curse of Ham as a justification for slavery, Morrisey writes that Noah "no doubt was angry at the time and spoke as one in such a temper in those times naturally would speak. Again, God had already blessed the descendants of Ham before Noah made his attempt to curse them; and God had placed his blessings upon them and had not withdrawn it: Noah had no power to revoke whatever God had done, however great his desire to pronounce a curse."

This book called "Bible History of the Negro Race" is indeed of unusual interest and importance. It may be rightly termed a brief history of some of the world's most illustrious men and women.