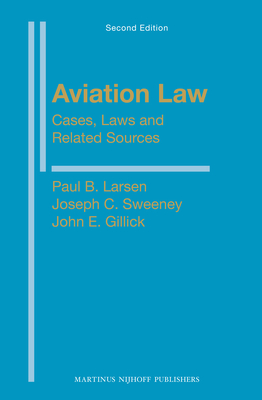 The flying public, airlines, and governments will all agree on one date that changed commercial flying: that was September 11, 2001. The first edition of Aviation Law: Cases, Laws and Related Sources, described early consequences of that event, particularly compensation of victims and early tightening of aviation security. Subsequently laws and regulations affecting all aspects of aviation changed so rapidly that it became difficult to set a cut-off date for the second edition. The rapid flow of events made an update urgent.

Several gaps in the materials of the first edition became evident as the book was used. The authors filled those gaps, pruned old materials and added much new material describing not only the later developments, but also evolving economics and flight technology.

The objective of the case book is to offer a basic handbook for air law practitioners providing them with a starting point for almost any subject they may encounter. For example, a lawyer specializing in liability law will quickly be able to find basic materials on the International Civil Aviation Organization (ICAO), air carrier licensing, FAA certification, and labor law.
The book continues to present aviation law from the American point of view. Thus the book will be valuable for foreign air lawyers who are guiding foreign airlines in service to the very important North American pool of air traffic. The book also explains the international scene to American air lawyers so that they may guide their clients who provide foreign service.
New chapters on liability for cargo damage and for ground damages have been added and new materials on the legal rights of lessors, successors, actual carriers and code-shares. A chapter on environmental regulation of aviation noise and emissions is also new. All the main subjects listed in the first edition are significantly updated.

The three authors are veteran transportation lawyers and continue their activities in this field.

Paul B. Larsen, LL.M., Institute of Air and Space Law, McGill University, Montreal. Professor Larsen has practiced law in the U.S. Department of Transportation (1970-1998) and provided counsel to the Administrative Conference of the United States and the Urban Institute. Professor Larsen was a research scholar of the Alexander V. Humboldt Foundation at the University of Cologne in 2010 and at the Max Planck Institute for Private International Law in Hamburg (1997-98). Professor Larsen was a U.S. Delegate to UNCITRAL, UNCTAD, IMO, ICAO, OAS, and bilateral negotiations. An adjunct professor at GULC since 1973, he has taught Aviation Law, Comparative Law, Conflicts of Law, International Law, and Property I and II in addition to the Space Law Seminar. Professor Larsen was an assistant professor at Southern Methodist University School of Law from 1966-69 and a visiting professor at Georgetown in 1978. Professor Larsen is the author of several books on aviation and space law, most recently Lyall and Larsen, Space Law, A Treatise (Ashgate 2009).Joseph Conrad Sweeney, the John D. Calamari Distinguished Professor of Law at the Fordham University School of Law, has taught Aviation Law since 1969, among other subjects. A graduate of Harvard College (A.B. 1954), Boston University School of Law (J.D. 1957), and Columbia University School of Law (LL.M. in International Law 1963), he served as an officer in the Navy Judge Advocate General's Corps at a naval air station, at the headquarters of the Destroyer Force of the Atlantic Fleet, and in California as well as at naval offices in London and Rome. He practiced law with the Admiralty law firm of Haight, Gardner, Poor & Havens and has represented the United States for the Department of State at sessions of UNCTAD and UNCITRAL in Geneva and Vienna and at diplomatic conferences in Hamburg, Brussels, Vienna and New York. John Gillick, his practice is focused on aviation regulatory, finance and litigation matters, representing U.S. and international passenger and cargo airlines, business jet companies, helicopter operators, aircraft manufacturers and other aviation-related businesses. Mr. Gillick is an adjunct professor of law at the Georgetown University Law Center where he teaches a course in aviation law. He also teaches aviation contract law for the International Air Transport Association, and has taught courses for IATA in Geneva, Singapore, Beijing, Hanoi and Miami for its member airline officials and employees. He also writes and speaks on aviation law and business topics as well as hazardous materials transportation matters at government and industry seminars.