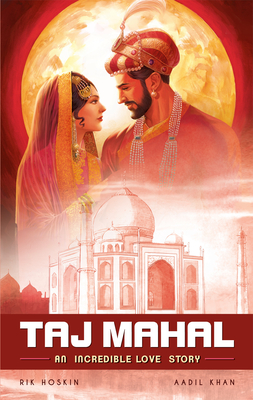 The Taj Mahal in India has been called a 'teardrop on the cheek of time'. This grand monument that was raised to house the mortal remains of Mumtaz Mahal, the Mughal emperor Shah Jahan's beloved wife, today draws millions of visitors from across the globe.

One of more than 85 titles Campfire has published since their introduction to North America in 2010.

This is the story behind the Taj Mahal - of the incredible love story of Shah Jahan and Mumtaz Mahal, how they met and fell in love, and how Shah Jahan was to lose her as she died while giving birth. This is also the story of how the Taj Mahal was built, and how the great Mughal emperor spent his last days imprisoned in his fort, pining for his beloved Mumtaz, as he gazed over the river for a view of the magnificent edifice, a monumental reminder of his love and loss.

Rik Hoskin is a comic book writer and novelist from Dorset, United Kingdom. He wrote the New York Times bestselling graphic novel, White Sand, with fantasy author Brandon Sanderson, and has also written Superman, Star Wars, Doctor Who, Mercy Thompson, Dean Koontz's Frankenstein and helped develop a successful Spider-Man title aimed at younger readers. He's recently written two animated 'motion comics' for BBC Television in the U.K. As a novelist, Rik has written Hercules, the Legendary Journeys and was previously the primary author on the Outlanders science fiction series under the pen-name 'James Axler', as whom he wrote twenty-four novels.

Aadil Khan, a resident of Delhi, has been interested in art ever since he was a small child. Growing up reading comics, he considers Jim Lee and Frank Frazetta as his major influences. Based in Delhi, he has previously worked as an artist with Raj Comics, Q2A and other organisations. This is his first book with Campfire.

"The detailed, full-color illustrations enhance the story with their expressiveness and rich jewel tones." — Kirkus Reviews