From Indus to Independence - A Trek Through Indian History: Vol VIII A Chronicle of the Imperial Mughals (Hardcover) 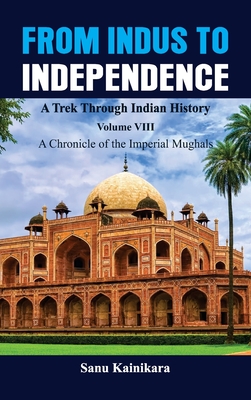 This is the eighth volume of the series on Indian history, From Indus to Independence: A Trek through Indian History and provides a narrative of the reign of the Imperial Mughals. The period analysed in this volume, 1526-1707, covers the rule of the first six Mughal emperors who have been traditionally referred to as the 'Great' or 'Imperial Mughals'.

The Mughals invaded the sub-continent mainly because the first Mughal, Babur, a direct descendant of both Timur and Genghis Khan, was unable to craft a kingdom for himself in Central Asia after he had lost his patrimony in Fergana at a young age to his uncles. The first three emperors discussed in this book took the empire to its zenith of power, while the last two could be considered to have sown the seeds that led to its eventual weakening, degeneration and downfall.

This book provides a detailed historical narrative of the events that transpired during the 181-years of Imperial Mughal rule. At the time of the death of Aurangzeb, the sixth Mughal, the empire encompassed almost the entire sub-continent, at least superficially. This chronicle also carries out an analysis of the successes and failures of the emperors, the role that religion played in establishing the Mughal Empire, as well as in its decline and decay. The book provides the reader with an in-depth understanding of the irrevocable and fundamental forces of history that combine to create, nourish and inevitably dismember empires.