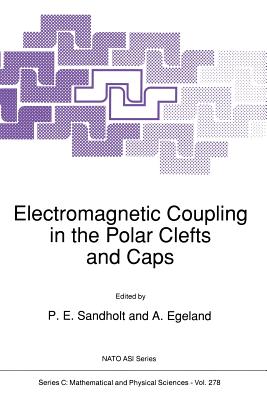 These proceedings are based upon in roductory talks, re- search repor's and discussions at the NATO Advanced Work- shop on ELECTROMAGNETIC COUPLING IN THE POLAR CLEFTS AND CAPS, held at Lillehammer, Norway, 20-24th September 1988. By this book we will make the information which was pro- vided to the participants of the workshop, accessible to a wider audience. Electromagnetic processes governing particle, momen- tum, and energy transfer from the solar wind via the magne- tosphere and into the earth's upper atmosphere are the main topics of solar-terrestrial research. Due to the peculiar magnetic field configuration in the magnetosphere, result- ing from the interaction with the shocked solar wind, the sunward-side boundary is mapped along magnetic field lines in o a thin, arc-like band of the days ide polar ionosphere at the boundary of the polar cap; i.e. he ionospheric cleft region. The polar cusp is a separate, more limited region near magnetic noon, as defined by electron and proton precipitation detected from polar orbiting satel- lites. The basic physics of the different coupling modes at the dayside magnetopause is a matter of great controversy. This is an important problem to solve, also because similar boundaries exist in stellar objects throughout the Uni- verse. It is expected that ground-based remote sensing tech- niques, with their ability to continuously monitoring the temporal and spatial variations of the ionospheric signa- tures, will have a great impact on this problem, in parti- cular when combined with in situ measurements.