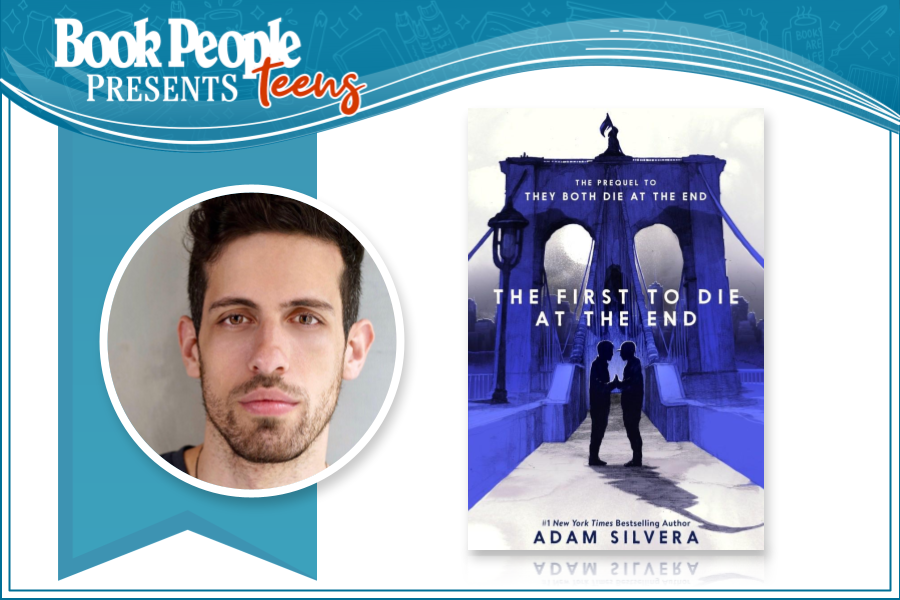 Join us in celebrating Adam Silvera’s new book The First to Die at the End! He will be in conversation with Aaron Aceves. The event will include a moderated discussion, an audience Q&A, and a signing line.

EVENT INFO:
EVENT GUIDELINES:
ABOUT THE FIRST TO DIE AT THE END

In this prequel to #1 New York Times bestselling phenomenon They Both Die at the End, two new strangers spend a life-changing day together after Death-Cast first makes their fateful calls.

It’s the night before Death-Cast goes live, and there’s one question on everyone’s mind: Can Death-Cast actually predict when someone will die, or is it just an elaborate hoax?

Orion Pagan has waited years for someone to tell him that he’s going to die. He has a serious heart condition, and he signed up for Death-Cast so he could know what’s coming.

Valentino Prince is restarting his life in New York. He has a long and promising future ahead and he only registered for Death-Cast after his twin sister nearly died in a car accident.

Orion and Valentino cross paths in Times Square and immediately feel a deep connection. But when the first round of End Day calls goes out, their lives are changed forever—one of them receives a call, and the other doesn’t. Though neither boy is certain how the day will end, they know they want to spend it together…even if that means their goodbye will be heartbreaking.

Told with acclaimed author Adam Silvera’s signature bittersweet touch, this story celebrates the lasting impact that people have on each other and proves that life is always worth living to the fullest.

Adam Silvera is the New York Times bestselling author of More Happy Than Not, History Is All You Left Me, They Both Die at the End, Infinity Son, Infinity Reaper, and—with Becky Albertalli—What If It’s Us and Here’s to Us. He was named a Publishers Weekly Flying Start for his debut. Adam was born and raised in the Bronx. He was a bookseller before shifting to children’s publishing and has worked at a literary development company and a creative writing website for teens and as a book reviewer of children’s and young adult novels. He is tall for no reason and lives in Los Angeles. Visit him online at www.adamsilvera.com.

Aaron H. Aceves (he/him) is a bisexual, Mexican-American writer born and raised in East L.A. He graduated from Harvard College and received his MFA from Columbia University. His fiction has appeared in jmww, Epiphany, and them., among other places. He currently lives in Texas, where he serves as an Early Career Provost Fellow at UT Austin, and his debut novel, This Is Why They Hate Us, will be released August 23rd by Simon & Schuster Books for Young Readers.

Thank you for supporting Adam Silvera, Aaron Aceves, and your local independent bookstore!