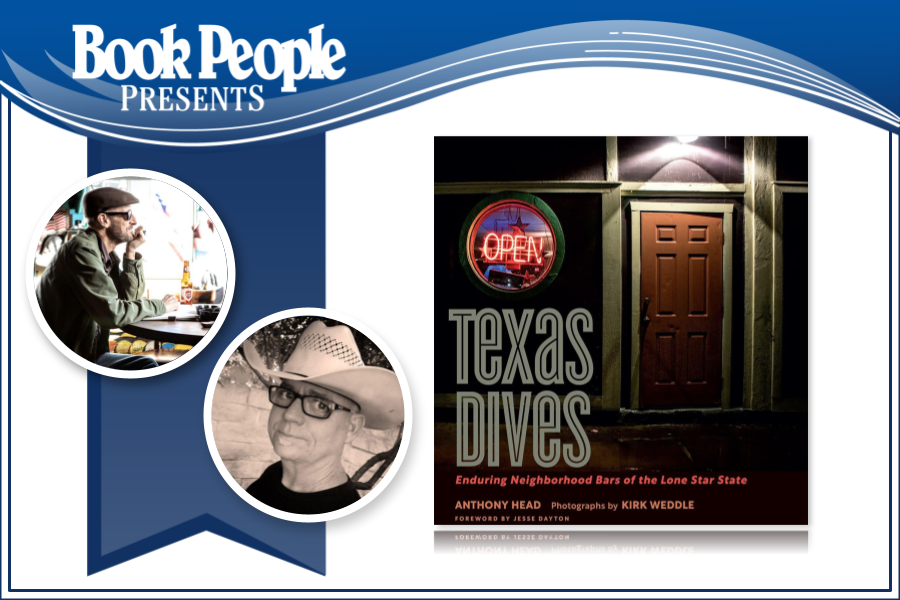 Join us in celebrating Anthony Head's and Kirk Weddle's new book Texas Dives! They will be joined by the special musical guest, Sid Grimes. The event will include an author discussion, a musical performance, an audience Q&A, and a signing line.

Veteran writer Anthony Head and internationally recognized photographer Kirk Weddle visit twelve bars in twelve Texas cities. With pithy text and revealing images, they tell the stories of some of these off-the-radar hangouts of Americana, shining light on the bars and their owners, staffs, and regulars. Head and Weddle are quick to point out that this book is not about drinking, per se: it’s a book about Texas culture intimately observed, plus just enough participation to claim with confidence that dives also serve as community anchor points, social clubs, and even, on occasion, places where enduring friendships are made.

This witty and sympathetic portrayal is sure to become a bucket-list book for general readers, fans of Texana, and almost anyone who has ever ducked around to the corner pub for a quick drink.

Anthony Head is the author of Spirit: The Life and Art of Jesse Treviño and other books. His writing has appeared in Texas Highways, Bon Appétit, Robb Report, and The Tasting Panel among other national and international publications. He lives in San Marcos, Texas.

Kirk Weddle is a photographer who specializes in creating enticing images on-location, in-studio and underwater. He is best known for the infamous Nirvana’s Nevermind album cover and his underwater photography featuring underwater images of Kurt Cobain and Dave Grohl. To see more of Kirk’s work, check out www.kirkweddle.com. Kirk’s images are shown at Modern Rocks Gallery in Austin, TX and at www.modernrocksgallery.com

Sid Grimes began singing and playing professionally as a solo artist in Chicago in 2015. Although she’s still a relatively new Texan, she did have the good fortune to play the celebrated Triple Crown in San Marcos in 2015, just before it closed forever. Sid currently performs regularly around Austin and central Texas, and her debut EP House of Cards is available right now.

[Virtual] Amplify Book Club: Tell Me How Long the Train's Been Gone

Adam Soto: Concerning Those Who Have Fallen Asleep