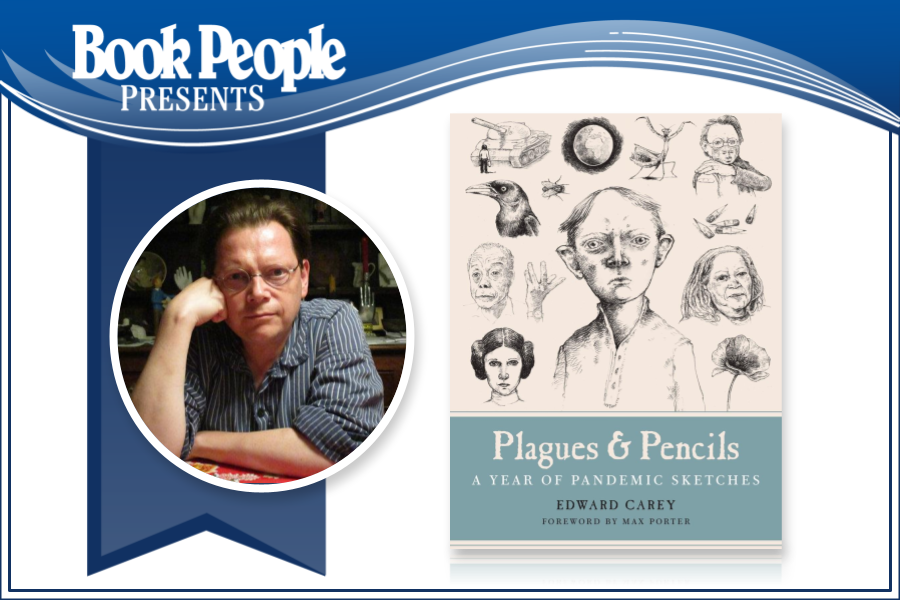 Plagues and Pencils: A Year of Pandemic Sketches (Hardcover)

Join us in celebrating the release of Edward Carey’s book Plagues & Pencils! He will be in conversation with Austin Kleon. The event will include a moderated discussion, an audience Q&A, and a signing line.

From the whimsical mind of Edward Carey, one drawing a day for an entire year of the COVID 19 pandemic.

In March 2020, as lockdowns were imposed around the world, author and illustrator Edward Carey raced home to Austin, Texas. The next day, he published on social media a sketch of “A Very Determined Young Man.” The day after, he posted another drawing. One year and one hundred and fifty Tombow B pencil stubs later, he was still drawing.

Carey’s pencil fills the page with the marvelous and intriguing, picturing people, characters, animals, monsters, and his favorite bird to draw, the grackle. He reaches into history and fiction to escape grim reality through flights of vivid imagination—until events demand the drawings “look straight on.”

Breonna Taylor, the Brontë sisters, John Lewis, King Lear, and even the portraits that mark the progress of the year for the Very Determined Young Man combine into a remarkable document of the pandemic and its politics. For Carey, though, trapped inside a home he loves, these portraits are something more, a way to chart time, an artist’s way of creating connection in isolation. With an introduction by Max Porter, this exceptional collection from the acclaimed author of Little marks a year of a man trapped with his pencil, determined to find solace amid uncertainty.

Edward Carey is the author and illustrator of four novels—Observatory Mansions, Alva & Irva, Little, and The Swallowed Man—and the YA series The Iremonger Trilogy. He teaches at the University of Texas at Austin.

Austin Kleon is the New York Times bestselling author of a trilogy of illustrated books about creativity in the digital age: Steal Like An Artist, Show Your Work!, and Keep Going. He’s also the author of Newspaper Blackout, a collection of poems made by redacting the newspaper with a permanent marker. His books have been translated into dozens of languages and have sold over a million copies worldwide.

Thank you for supporting Edward Carey, Austin Kleon, and your local independent bookstore!