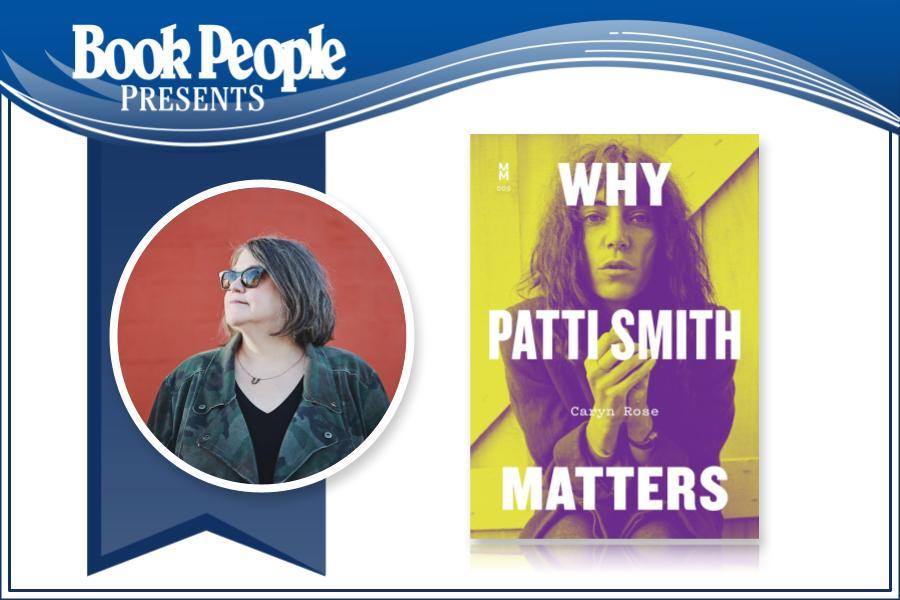 Join us in celebrating Caryn Rose’s new book Why Patti Smith Matters! She will be in conversation with Kathy Valentine and Jessica Luther. The event will include a moderated discussion, a reading, an audience Q&A, and a signing line.

Patti Smith arrived in New York City at the end of the Age of Aquarius in search of work and purpose. What she found—what she fostered—was a cultural revolution. Through her poetry, her songs, her unapologetic vocal power, and her very presence as a woman fronting a rock band, she kicked open a door that countless others walked through. No other musician has better embodied the “nothing-to-hide” rawness of punk, nor has any other done more to nurture a place in society for misfits of every stripe.

Why Patti Smith Matters is the first book about the iconic artist written by a woman. The veteran music journalist Caryn Rose contextualizes Smith’s creative work, her influence, and her wide-ranging and still-evolving impact on rock and roll, visual art, and the written word. Rose goes deep into Smith’s oeuvre, from her first album, Horses, to acclaimed memoirs operating at a surprising remove from her music. The portrait of a ceaseless inventor, Why Patti Smith Matters rescues punk’s poet laureate from “strong woman” clichés. Of course Smith is strong. She is also a nuanced thinker. A maker of beautiful and challenging things. A transformative artist who has not simply entertained but also empowered millions.

Caryn Rose is a longtime music journalist whose work has appeared in Pitchfork, MTV News, Salon, Billboard, the Village Voice, Vulture, and the Guardian. Her essay on Maybelle Carter was included in "Woman Walk the Line."

Kathy Valentine, a celebrated member of the Go-Go's and a Rock & Roll Hall of Fame inductee, is a lifelong musician and songwriter. Valentine also devotes her time to being an author, actor, producer, public speaker, and spokesperson. She currently lives in her hometown of Austin, Texas, with her daughter.

Jessica Luther is a freelance journalist whose work has appeared in Sports Illustrated, ESPN The Magazine, the New York Times Magazine, Texas Monthly, Huffington Post, BuzzFeed, and Vice Sports, among others. She is the author of Unsportsmanlike Conduct: College Football and the Politics of Rape and has written extensively on the intersection of sports and violence off the field.