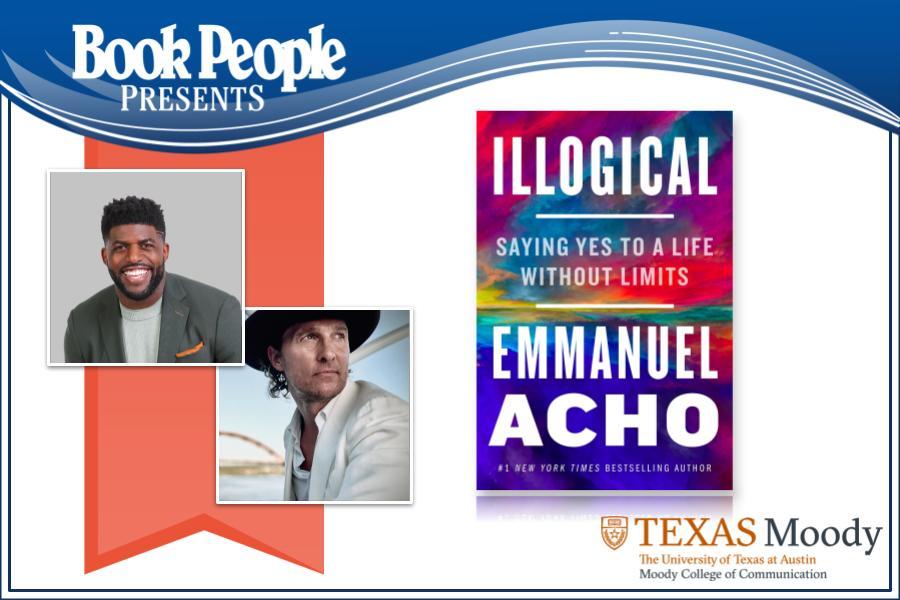 LBJ Auditorium event attendees enter the auditorium through the lobby of the LBJ School of Public Affairs. Parking is available in Lot 40, a surface lot that features 241 first-come-first-serve parking spaces located at the corner of Dean Keaton Blvd and Red River Street. Overflow parking can be found in the two closest parking garages, Manor Road Garage (MAG) and San Jacinto Garage (SJG), both about .5 mile from the LBJ Auditorium. Garage fees will apply. Additionally, there is limited street parking on Dean Keeton and Red River. Parking in an area that requires a UT Permit will result in a ticket. The event organizers are not responsible for tickets that are issued while attending an event at the LBJ Auditorium.

From the New York Times bestselling author of Uncomfortable Conversations with a Black Man, a call to break through our limits and say yes to a life of infinite possibility.

You may know Emmanuel Acho as the host of groundbreaking video series “Uncomfortable Conversations with a Black Man.” Or as a New York Times bestselling author. Or as an Emmy-winning television broadcaster. Or as a former linebacker for two NFL franchises.

What you probably don’t know is that Emmanuel defines his own life with just one word: Illogical.

Behind every triumph, every expression of his gifts, Acho has had to ignore what everyone around him called “logic”: the astronomical odds against making it, the risks of continuing to dream bigger or differently. Instead of playing it safe, at every turn Acho has thrown conventional wisdom—logic—out the window. Now, in this revelatory book, he’s empowering us all to do the same.

Whether it’s creating the next groundbreaking startup, fighting for change as an activist, or committing to a personal passion, Illogical is the go-to book for all readers ready to become change-makers. With a step-by-step guide to finding our callings and shifting our mindsets, enlivened by stories from Acho’s life and other illogical pioneers, Acho asks us to replace the limits set for us, and which we set for ourselves, with a world of possibility. Our horizons, he shows us, are endless.

EMMANUEL ACHO, the son of Nigerian immigrant parents, grew up in Dallas with his three siblings. He is a #1 New York Times bestselling author and the host/producer of the Emmy Award–winning Uncomfortable Conversations with a Black Man. His groundbreaking online series, intended to drive meaningful dialogue around racial insensitivity and ignorance, launched in June 2020, with more than 90 million views to date.

Emmanuel is a 2021 Sports Emmy winner, Fox Sports Analyst (cohost, FS1 Speak for Yourself) and television personality. He is a former NFL linebacker and has a master’s degree in sports psychology from the University of Texas. His third book, Illogical, debuted March 22, 2022.

Texas native MATTHEW MCCONAUGHEY is one of Hollywood’s most sought-after leading men. A chance meeting in Austin with casting director and producer Don Phillips led him to director Richard Linklater, who launched the actor’s career in the cult classic “Dazed and Confused.” Since then, he has won an Academy Award for his portrayal of Ron Woodruff in "Dallas Buyers Club", appeared in over 40 feature films that have grossed over $1 billion; and has become a producer, director, and philanthropist with his just keep livin Foundation – all the while sticking to his Texas roots and “jk livin” philosophy. McConaughey also serves as creative director for Wild Turkey and has co-created his own bourbon, Longbranch. He serves as Minister of Culture/M.O.C. for the University of Texas Athletic Department and The Austin FC Soccer Club, where he is part owner. In 2020, McConaughey released his first book, Greenlights which became an instant New York Times #1 best seller and has sold over three million copies worldwide. He currently resides in Austin, Texas with his wife Camila and their three kids, while he is a professor at the University of Texas in Austin.

Thank you for supporting Emmanuel Acho, Matthew McConaughey, and your local independent bookstore!