The Ann Richards Legacy Project: The One Ann Only 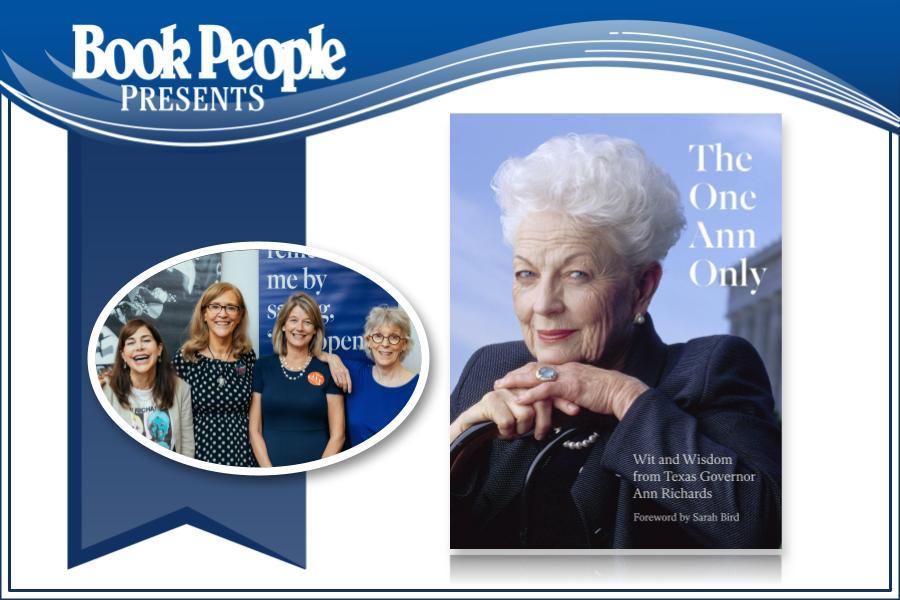 The One Ann Only: Wit and Wisdom from Texas Governor Ann Richards (Hardcover)

Join us in celebrating the Ann Richard Legacy Project's new book The One Ann Only! Margaret Justus, Sarah Bird, Lynne Dobson, and Ave Bonar will be in conversation. The event will include a moderated discussion, an audience Q&A, and a signing line.

ABOUT THE ONE ANN ONLY

A collection of classic and clever one-liners from the outspoken feminist Ann Richards, the forty-fifth governor of Texas.

One of the most unforgettable politicians in American history, Dorothy Ann Willis Richards (1933–2006) was the first woman to be elected, in her own right, governor of Texas; she served from 1991 to 1995. Richards transformed the state government to resemble the diverse population of Texas, appointing a record number of women, people of color, people with disabilities, and LGBTQ community members to Texas boards and state agencies.

Governor Richards was known as much for her humor as for her politics. Her witty one-liners, shrewdly delivered with a thick Waco accent, could bring down the house. Add in her striking appearance—big white hair and turquoise eyes—and her presence left an indelible impression.

With a thoughtful foreword by award-winning novelist Sarah Bird, The One Ann Only presents Ann’s famous witticisms alongside striking images throughout her life and political career by Texas photographers. This little book can serve as a Texas-sized inspiration to everyone, especially current and future public servants, teachers, parents, and people in recovery.

Margaret Justus is an Austin communications consultant and a former broadcast news journalist who grew up in Kansas City and has lived in Texas for 34 years--- 20 years in Austin and 14 years in Houston.

Justus founded the Ann Richards Legacy Project in 2021, a nonprofit that created and displayed more than 300 Ann Richards street banners in major Texas cities across the state. The Pentagram designed banners honored the 30th anniversary of the inauguration of Texas Governor Ann Richards, for whom Justus served as deputy press secretary from 1989-1994.

Justus then collaborated with Austin philanthropists, Lynne Dobson and Greg Wooldridge and Pentagram to publish The One Ann Only: Wit and Wisdom from Texas Governor Ann Richards.

Sarah Bird’s novel, Above the East China Sea, was long-listed for the Dublin International Literary Award. A Dobie-Paisano Fellowship helped in researching Daughter of a Daughter of a Queen, and her most recent book is Last Dance on Starlight Pier. Raised in an Air Force family on bases around the world, Sarah is the child of two warriors, a WWII Army nurse and an Air Corps bombardier, who met at a barn dance in North Africa. She lives in Austin, Texas.

Lynne Dobson is a philanthropist, business owner and photojournalist who lives in Austin, Texas with her husband, Greg Wooldridge. They have two adult children and a grandson.

A graduate of University of Texas, Austin, she had a 25-year career as a photojournalist for newspapers in Ohio, California and Austin. For the last 15 years, she has worked part-time as a humanitarian photographer for many global organizations she passionately supports in East Africa.

Ave Bonar is a photographer with an eye for the quirky. Her first love in photography, however, is the documentary tradition and in 1990 she had the opportunity to photograph Ann Richards’s historic and successful race for governor. That work culminated in the book, With Ann: A Journey Across Texas with a Candidate for Governor.

Twenty years later when Holland Taylor wrote and starred in her play about Ann, Ave again immersed herself in Ann Richards when Holland invited her to document the production of the play, beginning with rehearsals in Los Angeles and culminating in her Tony-nominated stage show in New York.