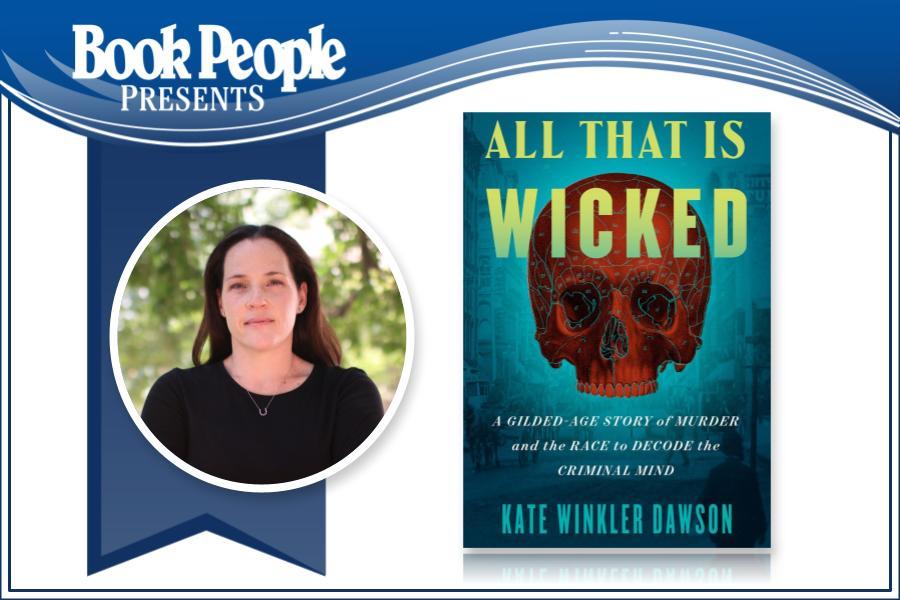 All That Is Wicked: A Gilded-Age Story of Murder and the Race to Decode the Criminal Mind (Hardcover)

Join us in celebrating Kate Winkler Dawson’s new book All That Is Wicked! She will be in conversation with Becka Oliver. The event will include a moderated discussion, a reading, an audience Q&A, and a signing line.

ABOUT ALL THAT IS WICKED

Acclaimed crime historian, podcaster, and author of American Sherlock Kate Winkler Dawson tells the thrilling story of Edward Rulloff—a serial murderer who was called “too intelligent to be killed”—and the array of 19th century investigators who were convinced his brain held the key to finally understanding the criminal mind.

Edward Rulloff was a brilliant yet utterly amoral murderer—some have called him a “Victorian-era Hannibal Lecter”—whose crimes spanned decades and whose victims were chosen out of revenge, out of envy, and sometimes out of necessity. From his humble beginnings in upstate New York to the dazzling salons and social life he established in New York City, at every turn Rulloff used his intelligence and regal bearing to evade detection and avoid punishment. He could talk his way out of any crime...until one day, Rulloff's luck ran out.

By 1871 Rulloff sat chained in his cell—a psychopath holding court while curious 19th-century "mindhunters" tried to understand what made him tick. From alienists (early psychiatrists who tried to analyze the source of his madness) to neurologists (who wanted to dissect his brain) to phrenologists (who analyzed the bumps on his head to determine his character), each one thought he held the key to understanding the essential question: is evil born or made? Eventually, Rulloff’s brain would be placed in a jar at Cornell University as the prize specimen of their anatomy collection...where it still sits today, slowly moldering in a dusty jar. But his story—and its implications for the emerging field of criminal psychology—were just beginning.

Expanded from season one of her hit podcast on the Exactly Right network (7 million downloads and growing), in All That Is Wicked Kate Winkler Dawson draws on hundreds of source materials and never-before-shared historical documents to present one of the first glimpses into the mind of a serial killer—a century before the term was coined—through the scientists whose work would come to influence criminal justice for decades to come.

Kate Winkler Dawson is a seasoned documentary producer and crime historian whose work has appeared in The New York Times, WCBS News and ABC News Radio, PBS NewsHour, and Nightline. She is the author of American Sherlock: Murder, Forensics, and the Birth of American CSI, Death in the Air: The True Story of a Serial Killer, The Great London Smog, and the Strangling of a City and professor of journalism at The University of Texas at Austin.

Becka Oliver is the Executive Director of the Writers’ League of Texas. She spent much of her publishing career inside two of the “big five” publishing leaders – Macmillan and Hachette Book Group — licensing domestic and foreign rights on behalf of countless notable authors, including Sandra Brown, Brad Meltzer, Nicholas Sparks, Jon Stewart and the Daily Show, and more. In 2007, she made the leap from Associate Director of Subsidiary Rights at Grand Central Publishing to Literary Agent, first at Endeavor and then at William Morris Endeavor (WME) after the two powerhouse talent agencies merged. As a literary agent, Becka represented clients working in both fiction and nonfiction, including Brunonia Barry, Sheryl Crow, Kamran Pasha, Joanna Philbin, Susan Rebecca White, and the popular blog Awkward Family Photos.

Thank you for supporting Kate Winkler Dawson and your local independent bookstore!