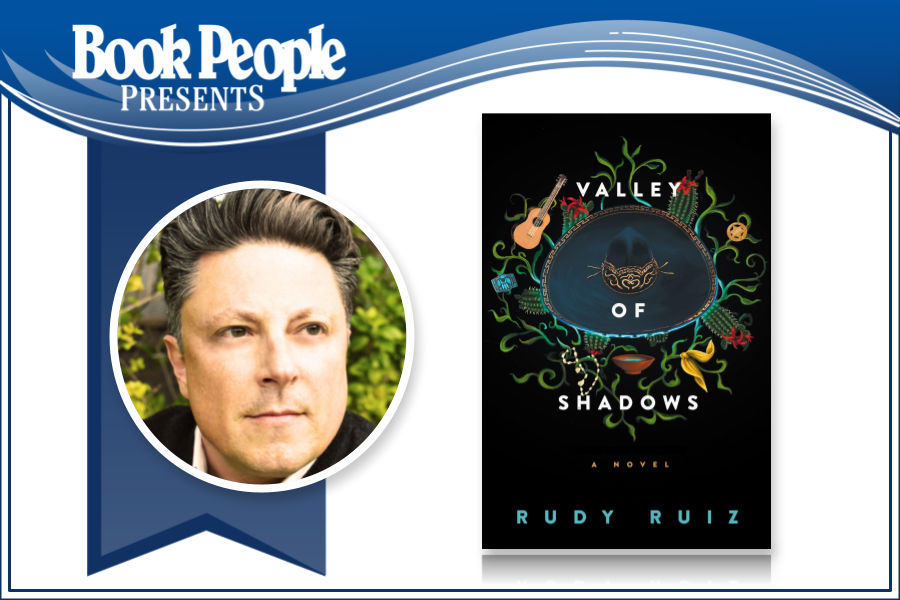 Join us in celebrating Rudy Ruiz's new book Valley of Shadows! The event will include an author discussion, an audience Q&A, and a signing line.

ABOUT VALLEY OF SHADOWS

A visionary neo-Western blend of magical realism, mystery, and horror, Valley of Shadows sheds light on the dark past of injustice, isolation, and suffering along the US-Mexico border.

Solitario Cisneros thought his life was over long ago. He lost his wife, his family, even his country in the late 1870s when the Rio Grande shifted course, stranding the Mexican town of Olvido on the Texas side of the border. He’d made his brooding peace with retiring his gun and badge, hiding out on his ranch, and communing with horses and ghosts. But when a gruesome string of murders and kidnappings ravages the town, pushing its volatile mix of Anglo, Mexican, and Apache settlers to the brink of self-destruction, he feels reluctantly compelled to confront both life, and the much more likely possibility of­ ­death, yet again.

As Solitario struggles to overcome not only the evil forces that threaten the town but also his own inner demons, he finds an unlikely source of inspiration and support in Onawa, a gifted and enchanting Apache-Mexican seer who champions his cause, daring him to open his heart and question his destiny.

As we follow Solitario and Onawa into the desert, we join them in facing haunting questions about the human condition that are as relevant today as they were back then: Can we rewrite our own history and shape our own future? What does it mean to belong to a place, or for a place to belong to a people? And, as lonely and defeated as we might feel, are we ever truly alone?

Through luminous prose and soul-searching reflections, Rudy Ruiz transports readers to a distant time and a remote place where the immortal forces of good and evil dance amidst the shadows of magic and mountains.

Rudy Ruiz is an award-winning author. His novel, The Resurrection of Fulgencio Ramirez, received two Gold Medals at the 2021 International Latino Book Awards. It was also a finalist for the Western Writers of America Silver Spur Award for Best Contemporary Novel. His short-story collection Seven for the Revolution captured four International Latino Book Awards, including the Mariposa Prize for Best First Book. In 2017, he garnered the Gulf Coast Prize in Fiction. A bilingual native of the US-Mexico border, he earned his bachelor’s and master’s degrees at Harvard and now resides in San Antonio, Texas, with his wife and children. Visit his website at RudyRuiz.com.

Thank you for supporting Rudy Ruiz and your local independent bookstore!