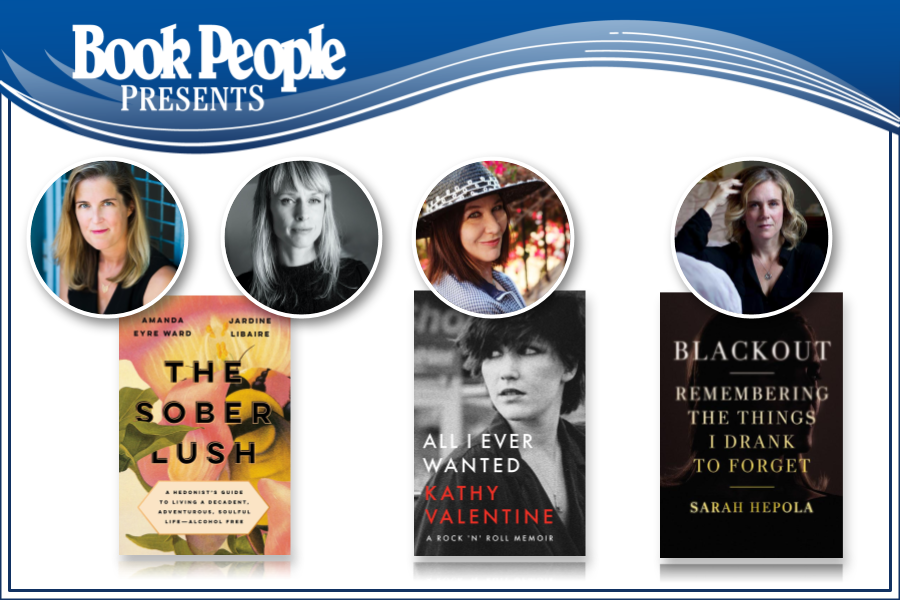 All I Ever Wanted: A Rock 'n' Roll Memoir (Hardcover)

Blackout: Remembering the Things I Drank to Forget (Paperback)

ABOUT THE SOBER LUSH

A sober hedonist’s guide to living a decadent, wild, and soulful life—alcohol-free.

In a culture where sipping “rose all day” is seen as the epitome of relaxation, “grabbing a drink” the only way to network; and meeting at a bar the quintessential “first date,” many of us are left wondering if drinking alcohol really is the only way to cultivate joy and connection in life.

Jardine Libaire and Amanda Eyre Ward wanted to live spontaneous and luxurious lives, to escape the ordinary and enjoy the intoxicating. Their drinking, however, had started to numb them to the present moment instead of unlocking it. Ward was introduced to Libaire when she first got sober. As they became friends, the two women talked about how they yearned to create lives that were Technicolor, beautifully raw, connected, blissed out, and outside the lines…but how? In The Sober Lush, Libaire and Ward provide a road map for living a lush and sensual life without booze. This book offers ideas and instruction for such nonalcoholic joys as:

The allure of “the Vanish,” in which one disappears early from the party without saying goodbye to a soul, to amble home under the stars

The art of creating zero-proof cocktails for all seasons

Having a fantastic first date while completely sober

A primer on setting up your own backyard beehive, and honey tastings

For anyone curious about lowering their alcohol consumption or quitting drinking altogether, or anyone established in sobriety who wants inspiration, this shimmering and sumptuous book will show you how to keep indulging in life even if you stop indulging in alcohol.

Amanda Eyre Ward is the author of six novels, including How to Be Lost and The Same Sky. Her seventh novel, The Jetsetters, will be published by Ballantine. Ward’s work has been optioned for film and television and published in fifteen countries. Ward has been chosen twice as a Target Bookmarked pick and has published essays in women’s magazines, The New York Times, and The Washington Post.

Jardine Libaire is the author of two novels, Here Kitty Kitty and White Fur, which was a Barnes & Noble Discovery pick, a Book of the Month Club selection, and an Amazon Best Book. She writes for women’s magazines, film, and TV.

Kathy Valentine is a working musician and songwriter known for being part of the all-female band the Go-Go's. She wrote or cowrote many of the band's most renowned songs, including "Vacation" and "Head Over Heels." In addition to playing music and writing songs, Valentine has worked as an actor, public speaker and spokesperson, and producer. In 2017 she created "She Factory," an event series to raise money for women-centered nonprofits. She currently lives in her hometown of Austin with her daughter, where she plays in a band and is completing her first college degree.

Sarah Hepola's writing has appeared in the New York Times Magazine, New Republic, Glamour, Slate, Guardian, and Salon, where she was a longtime editor. She has worked as a music critic, travel writer, film reviewer, sex blogger, beauty columnist, and high school English teacher. She lives in Dallas.