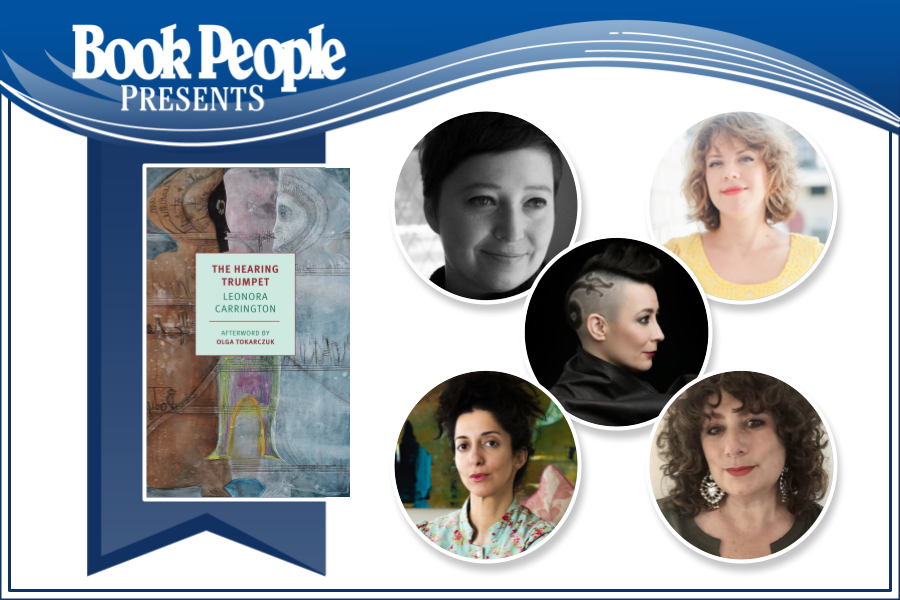 ABOUT THE HEARING TRUMPET

An old woman enters into a fantastical world of dreams and nightmares in this surrealist classic admired by Björk and Luis Buñuel.

Leonora Carrington, painter, playwright, and novelist, was a surrealist trickster par excellence, and The Hearing Trumpet is the witty, celebratory key to her anarchic and allusive body of work. The novel begins in the bourgeois comfort of a residential corner of a Mexican city and ends with a man-made apocalypse that promises to usher in the earth’s rebirth. In between we are swept off to a most curious old-age home run by a self-improvement cult and drawn several centuries back in time with a cross-dressing Abbess who is on a quest to restore the Holy Grail to its rightful owner, the Goddess Venus. Guiding us is one of the most unexpected heroines in twentieth-century literature, a nonagenarian vegetarian named Marian Leatherby, who, as Olga Tokarczuk writes in her afterword, is “hard of hearing” but “full of life.”

Alyssa Harad is the author of a memoir, Coming to My Senses. She has published essays in Jewish Quarterly, O: The Oprah Magazine, The Chronicle of Higher Education and other venues. She is currently writing a novel inspired by the lives and art of women associated with Surrealism featuring a singing hyena. She lives in Austin, TX.

Porochista Khakpour's debut novel, Sons and Other Flammable Objects, was a New York Times Editor’s Choice, one of the Chicago Tribune’s Fall’s Best, and the 2007 California Book Award winner in the First Fiction category. Her second novel The Last Illusion was a 2014 “Best Book of the Year” according to NPR, Kirkus Reviews, BuzzFeed, PopMatters, Electric Literature, and many more. Among her many fellowships is a National Endowment for the Arts award. Her nonfiction has appeared in many sections of The New York Times, the Los Angeles Times, Elle, Slate, Salon, and Bookforum, among many others. She has been guest faculty at VCFA and Stonecoast’s MFA programs, as well as Contributing Editor at Evergreen Review. Born in Tehran and raised in the Los Angeles area, Khakpour currently splits her time between New York City’s Harlem and Santa Fe, New Mexico.

Maria Dahvana Headley is a #1 New York Times–bestselling author and editor. Her books include the novels The Mere Wife, Magonia, Aerie, and Queen of Kings, and the memoir The Year of Yes. With Kat Howard, she is the author of The End of the Sentence, and with Neil Gaiman, she is the coeditor of Unnatural Creatures. Her stories have been short-listed for the Shirley Jackson, Nebula, and World Fantasy Awards, and her work has been supported by the MacDowell Colony and by Arte Studio Ginestrelle. She was raised with a wolf and a pack of sled dogs in the high desert of rural Idaho and now lives in Brooklyn, New York.

Amber Sparks is the author of The Unfinished World, and her fiction and essays have appeared in American Short Fiction, Paris Review, Tin House, Granta, and elsewhere. She lives in Washington, DC, with her husband, daughter, and two cats.

Taisia Kitaiskaia was born in Russia and raised in America. She is the author of Ask Baba Yaga: Otherworldly Advice for Everyday Troubles; The Nightgown and Other Poems; and a collaboration with artist Katy Horan, Literary Witches: A Celebration of Magical Women Writers, as well as the book's companion, The Literary Witches Oracle. Taisia lives in Austin, Texas.