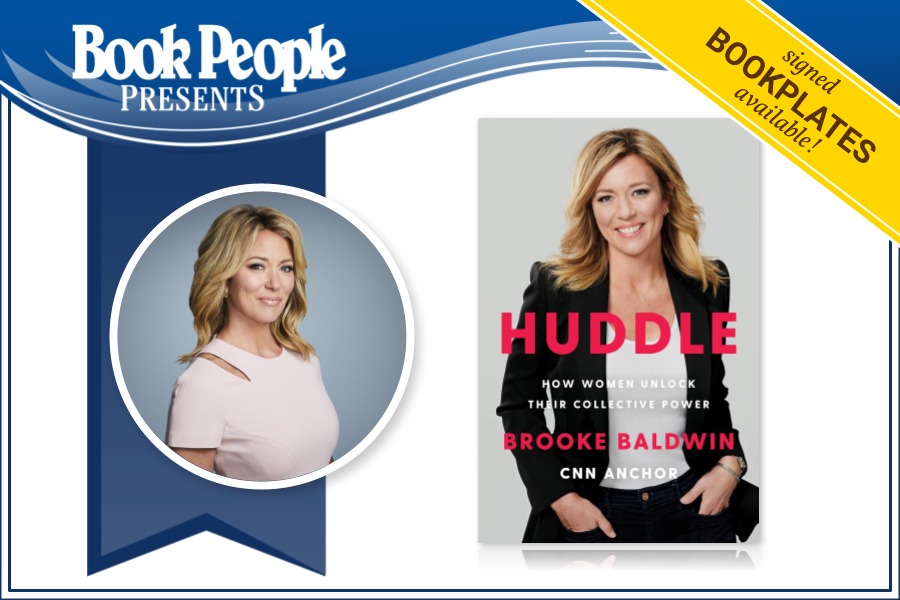 In conversation with Douglas Brinkley

What happens when women stop “leaning in” and start leaning on each other instead?

After reporting on the 2017 Women's March, CNN news anchor Brooke Baldwin set out on a journey across America to investigate the power of the “huddle” — a space (in the workplace and beyond) where women lean on each other for support, friendship, empowerment, and the strength to enact meaningful change. Beyond the headline-making huddles of recent years such as the #MeToo movement, the Times Up initiative, and the 2018 midterm elections when women won a historic number of seats across the country, Baldwin tells the stories of women of all ages, races, religions and socio-economic backgrounds who are huddling in all segments of society.

A mix of journalism and personal narrative, Huddle explores the benefits of all-girls learning environments, such as Karlie Kloss’s Kode with Klossy and Reese Witherspoon’s Filmmaker Lab for Girls in which young women are given the freedom to make mistakes and find their confidence. The book also looks at the tactics employed by huddles of women who work in male-dominated industries including a group of Democratic Congresswomen, a huddle of African American judges in Harris County, Texas, and an all-female writers room in Hollywood.

Baldwin speaks to trusted pioneers such as Gloria Steinem and Madeleine Albright as well as contemporary trailblazers like Stacey Abrams and Ava DuVernay. Baldwin shines a light on professionals such as Chef Dominique Crenn and sports agent Lindsay Colas who use their success to amplify other women in their fields. Baldwin also explores huddles dedicated to making seismic change, including indigenous women saving the planet, mothers fighting for sensible gun laws, America’s favorite female athletes (Megan Rapinoe, Hilary Knight, and Sue Bird to name a few) agitating for equal pay, and female teachers rallying to improve their working conditions. By examining female friendships as well as the bond between women who practice self-care together, Baldwin reveals how women are becoming more intentional about the healing power of friendship and solidarity in their personal spheres as well.

Along the way, Baldwin takes readers on her own personal journey of growing up in the South and climbing the ladder in a male-dominated industry during a nationwide “huddle drought.” Her story is one of learning to lean on female friends and colleagues and eventually transforming from a journalist to a champion for women. She also shares her personal story of coronavirus and how it underscored for her the importance of connection.

Brooke Baldwin anchors CNN Newsroom with Brooke Baldwin from 2-4pm ET. A Peabody Award finalist, Brooke is also the creator and host of CNN's Digital series American Woman. She has been with CNN since 2008.

Douglas Brinkley is the Katherine Tsanoff Brown Chair in Humanities and Professor of History at Rice University, a CNN Presidential Historian, and a contributing editor at Vanity Fair. He has received seven honorary doctorates in American Studies.  He works in many capacities in the world of public history, including for boards, museums, colleges and historical societies.  Six of his books were named New York Times “Notable Books of the Year” and seven became New York Times bestsellers.

His The Great Deluge: Hurricane Katrina, New Orleans and the Mississippi Gulf Coast, 2007, received the Robert F. Kennedy Human Rights Book Award. He was personally selected by Nancy Reagan to edit President Ronald Reagan’s presidential diaries (2011). His 2012 book Cronkite won Fordham University’s Ann M. Sperber Prize for outstanding biographies. His two-volume annotated The Nixon Tapes, 2016, won the Arthur S. Link – Warren F. Kuehl Prize. He received a Grammy Award in 2017 as co-producer of Presidential Suite: Eight Variations on Freedom (Best Jazz Ensemble). The New-York Historical Society selected Brinkley in 2017 as their official U.S. Presidential Historian. He is on the Board of Trustees at Brevard College and the Franklin D. Roosevelt Presidential Library. He is a member of the Century Association, Council of Foreign Relations and James Madison Council of the Library of Congress.

He lives in Austin, Texas with his wife and three children.

Thank you for supporting Brooke Baldwin, Doulgas Brinkley, and your local independent bookstore!