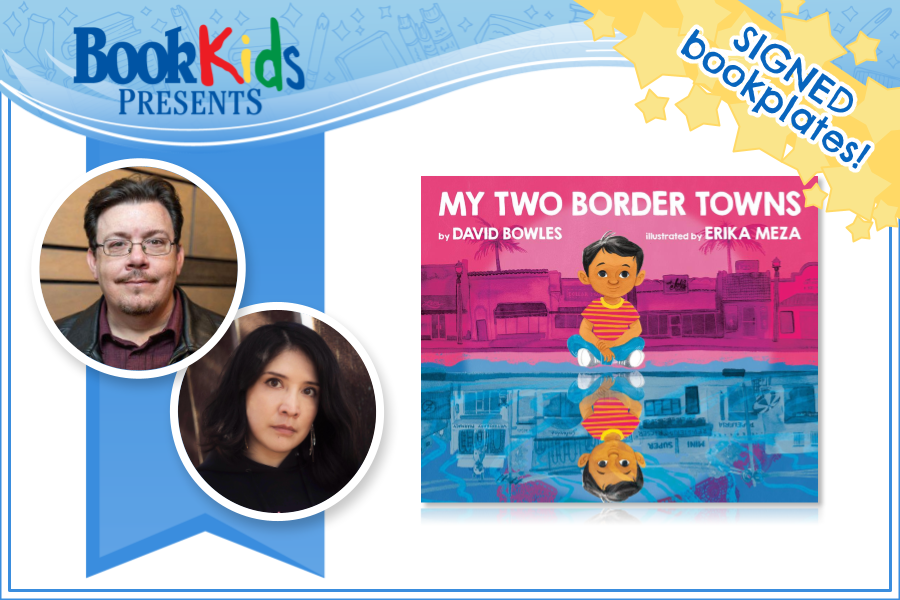 ABOUT MY TWO BORDER TOWNS

A picture book debut by an award-winning author about a boy’s life on the U.S.-Mexico border, visiting his favorite places on The Other Side with his father, spending time with family and friends, and sharing in the responsibility of community care.

Early one Saturday morning, a boy prepares for a trip to The Other Side/El Otro Lado. It’s close—just down the street from his school—and it’s a twin of where he lives. To get there, his father drives their truck along the Rio Grande and over a bridge, where they’re greeted by a giant statue of an eagle. Their outings always include a meal at their favorite restaurant, a visit with Tío Mateo at his jewelry store, a cold treat from the paletero, and a pharmacy pickup. On their final and most important stop, they check in with friends seeking asylum and drop off much-needed supplies.

My Two Border Towns by David Bowles, with stunning watercolor illustrations by Erika Meza, is the loving story of a father and son’s weekend ritual, a demonstration of community care, and a tribute to the fluidity, complexity, and vibrancy of life on the U.S.-Mexico borde

David Bowles grew up in the Río Grande Valley of South Texas. As a kid, he would regularly cross the border with his father to visit family, buy historietas, and watch movies. It’s a tradition he continued with his own children, making sure they became part of the transnational community he loves so much. David has written many books that center Mexican Americans in the borderlands, including the award-winning They Call Me Güero and the 13th Street series. My Two Border Towns, available in English and Spanish, is his debut picture book.

Erika Meza was born in Mexico, fell in love with animation on the border with California, and developed a taste for éclairs in Paris before moving to the U.K. An adoptive Tijuanense, she took her first steps to find her visual voice at the border--forever fueled by tacos de birria. When Erika isn't drawing, you'll find her drinking coffee, tweeting, or plotting ways to bring her cat traveling with her.

Thank you for supporting David Bowles, Erika Meza, and your local independent bookstore!