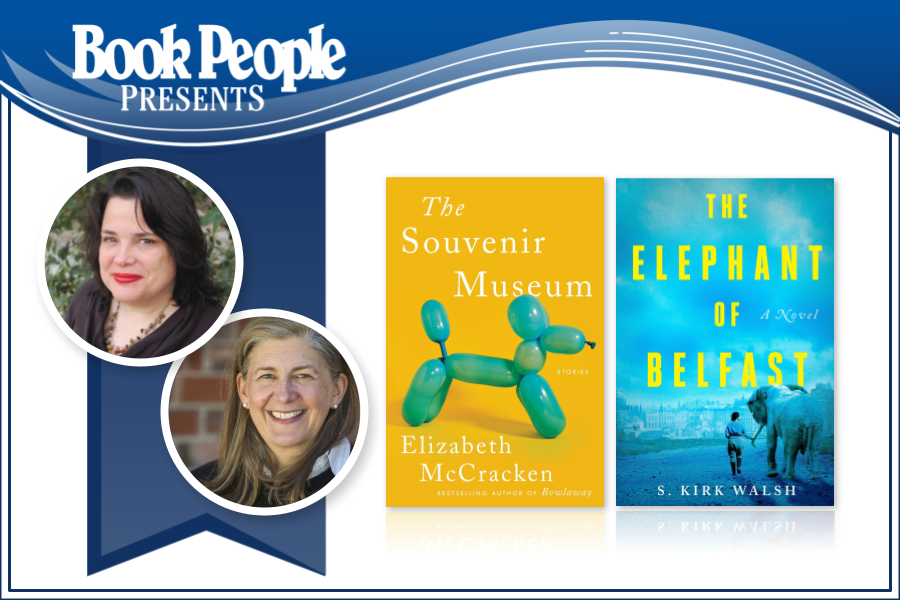 The Elephant of Belfast: A Novel (Hardcover)

Signed & Personalized copies of both books are available to order now.

ABOUT THE SOUVENIR MUSEUM

One of the most treasured writers of our day, award-winning author Elizabeth McCracken, is an undisputed virtuoso of the short story, and this new collection features her most vibrant and heartrending work to date

In these stories, the mysterious bonds of family are tested, transformed, fractured, and fortified. A recent widower and his adult son ferry to a craggy Scottish island in search of puffins. An actress who plays a children’s game-show villainess ushers in the New Year with her deadbeat half brother. A mother, pining for her children, feasts on loaves of challah to fill the void. A new couple navigates a tightrope walk toward love. And on a trip to a Texas water park with their son, two fathers each confront a personal fear.

With sentences that crackle and spark and showcase her trademark wit, McCracken traces how our closely held desires—for intimacy, atonement, comfort—bloom and wither against the indifferent passing of time. Her characters embark on journeys that leave them indelibly changed—and so do her readers. The Souvenir Museum showcases the talents of one of our finest contemporary writers as she tenderly takes the pulse of our collective and individual lives.

ABOUT THE ELEPHAN OF BELFAST

Inspired by true events, this vivid and moving story of a young woman zookeeper and the elephant she’s compelled to protect through the German blitz of Belfast during WWll speaks to not only the tragedy of the times, but also to the ongoing sectarian tensions that still exist in Northern Ireland today—perfect for readers of historical and literary fiction alike.

Belfast, October 1940. Twenty-year-old zookeeper Hettie Quin arrives at the city docks in time to meet her new charge: an orphaned three-year-old Indian elephant named Violet. As Violet adjusts to her new solitary life in captivity and Hettie mourns the recent loss of her sister and the abandonment of her father, new storm clouds gather. A world war rages, threatening a city already reeling from escalating tensions between British Loyalists and those fighting for a free and unified Ireland.

The relative peace is shattered by air-raid sirens on the evening of Easter Tuesday 1941. Over the course of the next five hours, hundreds of bombs rain down upon Belfast, claiming almost a thousand lives and decimating the city. Dodging the debris and carnage of the Luftwaffe attack, Hettie runs to the zoo to make sure that Violet is unharmed. The harrowing ordeal and ensuing aftermath set the pair on a surprising path that highlights the indelible, singular bond that often brings mankind and animals together during horrifying times.

Inspired by a largely forgotten chapter of World War II, S. Kirk Walsh deftly renders the changing relationship between Hettie and Violet, and their growing dependence on each other for survival and solace. The Elephant of Belfast is a complicated and beguiling portrait of hope and resilience—and how love can sustain us during the darkest moments of our lives.

S. Kirk Walsh is a writer living in Austin, Texas. Her work has been widely published in The New York Times Book Review, Longreads, StoryQuarterly, and Electric Literature, among other publications. Over the years, she has been a resident at Ucross, Yaddo, Ragdale, and Virginia Center for the Creative Arts. Walsh is the founder of Austin Bat Cave, a writing and tutoring center that provides free writing workshops for young writers throughout Austin. The Elephant of Belfast is her first novel.