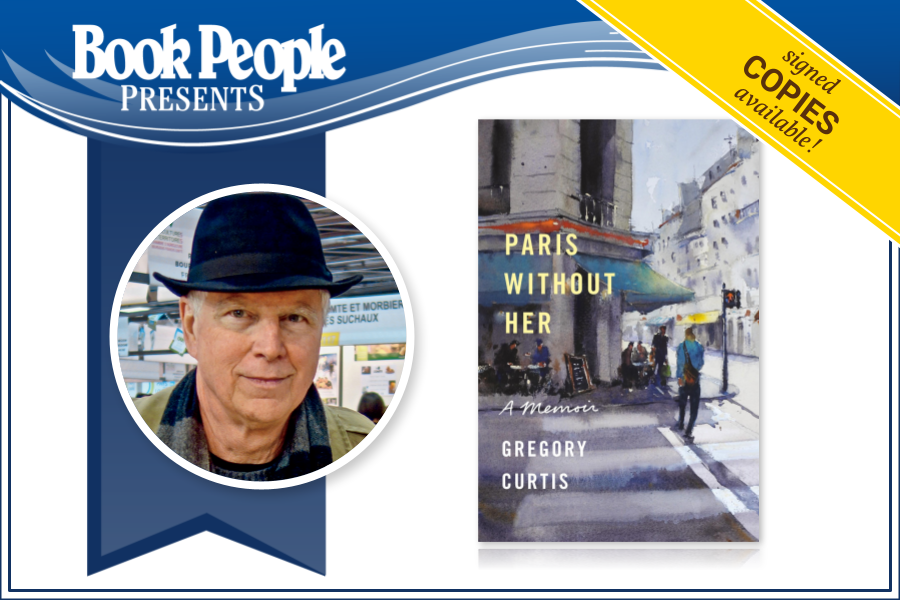 Paris Without Her: A Memoir (Hardcover)

In conversation with Stephen Harrigan

ABOUT PARIS WITHOUT HER

In this moving, tender memoir of losing a beloved spouse, the longtime editor of Texas Monthly, newly widowed, returns alone to a city whose enchantment he’s only ever shared with his wife, in search of solace, memories, and the courage to find a way forward.

At the age of sixty-six, after thirty-five years of marriage, Gregory Curtis finds himself a widower. Tracy—with whom he fell in love the first time he saw her—has succumbed to a long battle with cancer. Paralyzed by grief, agonized by social interaction, Curtis turns to watching magic lessons on DVD—“a pathetic, almost comical substitute” for his evenings with Tracy.

To break the spell, he returns to the place he had the “best and happiest times” of his life. As he navigates the storied city and contemplates his new future, Curtis relives his days in Paris with Tracy, piecing together the portrait of a woman, a marriage, parenthood, and his life’s great love through the memories of six unforgettable trips to the City of Lights.

Alone in Paris, Curtis becomes a tireless wanderer, exploring the city’s grand boulevards and forgotten corners as he confronts the bewildering emotional state that ensues after losing a life partner. Paris Without Her is a work of tremendous courage and insight—an ode to the lovely woman who was his wife, to a magnificent city, and to the self we might invent, and reinvent, there.

GREGORY CURTIS is the author of The Cave Painters: Probing the Mysteries of the World’s First Artists and Disarmed: The Story of the Venus de Milo. He was editor of Texas Monthly from 1981 until 2000. His work has appeared in The New York Times, The New York Times Magazine, Fortune, Time, and Rolling Stone, among other publications. A graduate of Rice University and San Francisco State College, he lives in Austin, Texas.

STEPHEN HARRIGAN is the author of nine previous books, including The New York Times best seller The Gates of the Alamo and Remember Ben Clayton, which among other awards won the James Fenimore Cooper Prize from the Society of American Historians for best historical novel. He is also a writer-at-large for Texas Monthly and a screenwriter who has written many movies for television. He lives in Austin, Texas.

Thank you for supporting Gregory Curtis, Stephen Harrigan, and your local independent bookstore!