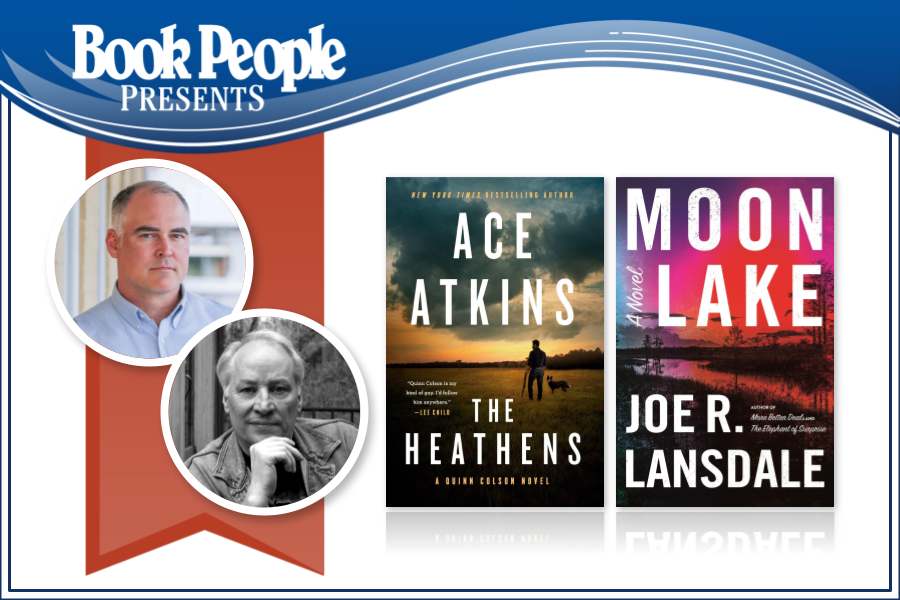 From an Edgar award-winning author comes the gripping and unexpected tale of a lost town and the dark secrets that lie beneath the glittering waters of an East Texas lake.

Daniel Russell was only thirteen years old when his father tried to kill them both by driving their car into Moon Lake. Miraculously surviving the crash—and growing into adulthood—Daniel returns to the site of this traumatic incident in the hopes of recovering his father's car and bones. As he attempts to finally put to rest the memories that have plagued him for years, he discovers something even more shocking among the wreckage that has ties to a twisted web of dark deeds, old grudges, and strange murders.

As Daniel diligently follows where the mysterious trail of vengeance leads, he unveils the heroic revelation at its core.
ABOUT THE HEATHENS
Sheriff Quinn Colson and his former deputy Lillie Virgil find themselves on opposite sides of a case for the first time after a woman is found dead and three delinquent teens go on the run.

Before he was an Army Ranger who came home to become Tibbehah County Sheriff and take down a corrupt system, Quinn Colson was a kid who got into trouble--a lot of it. So when juvenile delinquent TJ Byrd insists that she doesn’t know who killed her mother—an unreliable addict who has disappeared—Quinn’s inclined to believe her. But no one else does--not the town, not the sheriff in a neighboring county, not her mother’s older boyfriend, and certainly not Quinn’s friend and former deputy, U.S. Marshal Lillie Virgil.

The Byrd family has always been trouble, and sixteen-year-old TJ is known for petty theft, fighting, and general hellraising. She’s also no fool, and when she senses she’s about to take the fall for her mother’s murder, TJ, her boyfriend, her best friend, and her nine-year-old brother go on the run. As Lillie Virgil tracks the kids across a trail of burglaries, stolen cars and even a kidnapping, intent on bringing TJ to justice, Quinn sets out to find the truth back in Tibbehah. Someone has gone to a lot of violent trouble to make TJ and her friends the logical target of the investigation. It’s easy, and who cares about a bunch of lawless kids?

As the bloody evidence against TJ piles up, Quinn knows someone truly evil is at work here--and that puts TJ and her friends in more danger than they can imagine.

Ace Atkins is the author of twenty-eight books, including eleven Quinn Colson novels, the first two of which, The Ranger and The Lost Ones, were nominated for the Edgar Award for Best Novel (he has a third Edgar nomination for his short story “Last Fair Deal Gone Down”). He is the author of nine New York Times-bestselling novels in the continuation of Robert B. Parker’s Spenser series. Before turning to fiction, he was a correspondent for the St. Petersburg Times and a crime reporter for the Tampa Tribune, and he played defensive end for Auburn University football.