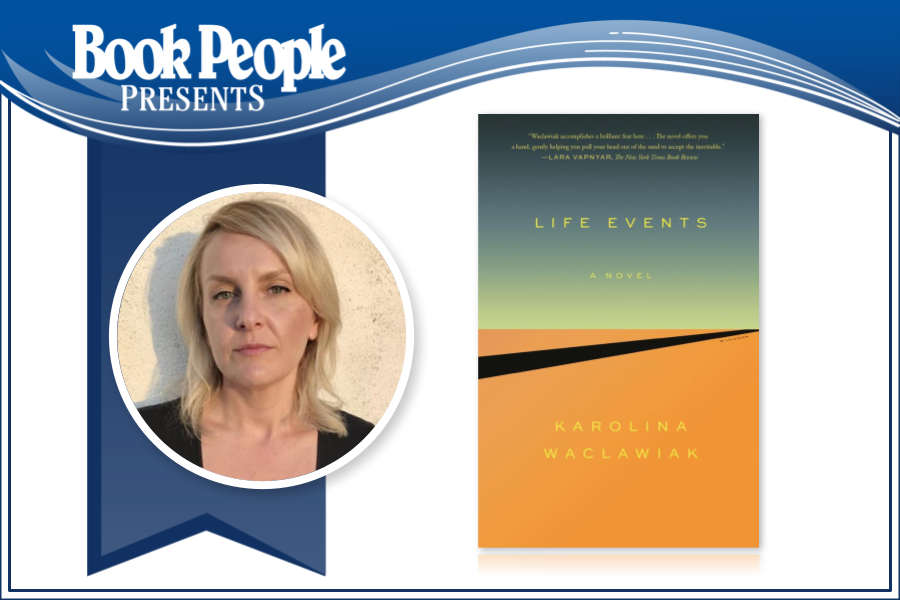 In conversation with Rachel Monroe

A woman at a crossroads learns the only way to reclaim her life is to help others die.

Karolina Waclawiak’s breakout novel, Life Events, follows Evelyn, who, at thirty-seven, is on the verge of divorce and anxiously dreading the death of everyone she loves. She combats her existential crisis by avoiding her husband and aimlessly driving along the freeways of California looking for an escape—one that eventually comes when she discovers a collective of “exit guides.” Evelyn enrolls in their training course, where she learns to provide companionship and a final exit for terminally ill patients seeking a conscious departure.

Sensitively observed and darkly funny, Life Events is a moving, enlivening story of the human condition: the doldrums of loneliness, the consuming regret of past mistakes, and the thrill, finally, of finding meaning—and love—where you least expect it.

Karolina Waclawiak is the author of the novels How to Get into the Twin Palms and The Invaders. Formerly an editor at The Believer, she is the executive editor of culture at BuzzFeed News. Her writing has appeared in The New York Times, Los Angeles Times, The Virginia Quarterly Review, Hazlitt, and elsewhere.

Rachel Monroe is a writer based in Marfa, Texas, whose work has appeared in the New Yorker, the New York Times Magazine, Esquire, Wired, and the Atlantic, where she is a contributing writer. Her first book, Savage Appetites: True Stories of Women, Crime, and Obsession (Scribner) was a New York Times Editor’s Choice and named a best book of the year by Esquire, theChicago Tribune, and Jezebel. Her work has been anthologized in Best American Travel Writing 2018 and Unspeakable Acts: True Tales of Crime, Murder, Deceit, and Obsession.

Thank you for supporting Karolina Waclawiak, Rachel Monroe, and your local independent bookstore!