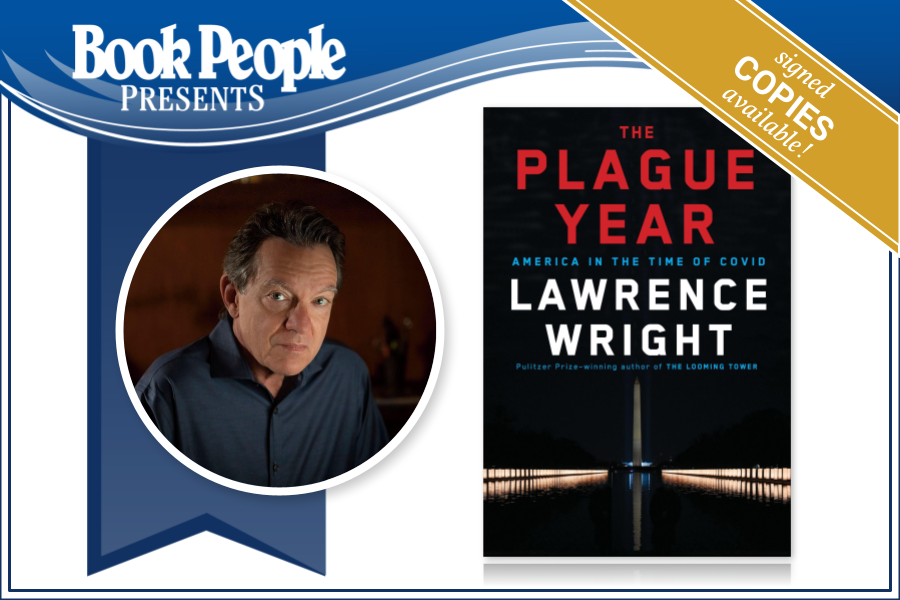 The Plague Year: America in the Time of Covid (Hardcover)

In conversation with Patrick Radden Keefe

ABOUT THE PLAGUE YEAR

From the Pulitzer Prize–winning author of The Looming Tower: an unprecedented, momentous account of Covid-19—its origins, its wide-ranging repercussions, and the ongoing global fight to contain it

From the fateful first moments of the outbreak in China to the storming of the U.S. Capitol to the extraordinary vaccine rollout, Lawrence Wright’s The Plague Year tells the story of Covid-19 in authoritative, galvanizing detail and with the full drama of events on both a global and intimate scale, illuminating the medical, economic, political, and social ramifications of the pandemic.

Wright takes us inside the CDC, where a first round of faulty test kits lost America precious time…inside the halls of the White House, where Deputy National Security Adviser Matthew Pottinger’s early alarm about the virus was met with confounding and drastically costly skepticism…into a Covid ward in a Charlottesville hospital, with an idealistic young woman doctor from the town of Little Africa, South Carolina…into the precincts of prediction specialists at Goldman Sachs…into Broadway’s darkened theaters and Austin’s struggling music venues… inside the human body, diving deep into the science of how the virus and vaccines function—with an eye-opening detour into the history of vaccination and of the modern anti-vaccination movement. And in this full accounting, Wright makes clear that the medical professionals around the country who’ve risked their lives to fight the virus reveal and embody an America in all its vulnerability, courage, and potential.

In turns steely-eyed, sympathetic, infuriated, unexpectedly comical, and always precise, Lawrence Wright is a formidable guide, slicing through the dense fog of misinformation to give us a 360-degree portrait of the catastrophe we thought we knew as we lived through it.

Lawrence Wright is a staff writer for The New Yorker, a playwright, a screenwriter, and the author of ten books of nonfiction, including The Looming Tower, Going Clear, and God Save Texas. His recent novel, The End of October, was a New York Times best seller. Wright’s books have received many honors, including a Pulitzer Prize for The Looming Tower. He and his wife are longtime residents of Austin, Texas.

Patrick Radden Keefe is a staff writer at The New Yorker  and the author, most recently, of the New York Times bestseller Say Nothing: A True Story of Murder and Memory in Northern Ireland, which received the National Book Critics Circle Award for Nonfiction, was selected as one of the ten best books of 2019 by The New York Times Book Review, The Washington Post, the Chicago Tribune and The Wall Street Journal, and was named one of the “10 Best Nonfiction Books of the Decade” by Entertainment Weekly. His previous books are The Snakehead and Chatter. His work has been recognized with a Guggenheim Fellowship, the National Magazine Award for Feature Writing and the Orwell Prize for Political Writing. He is also the creator and host of the eight-part podcast Wind of Change.