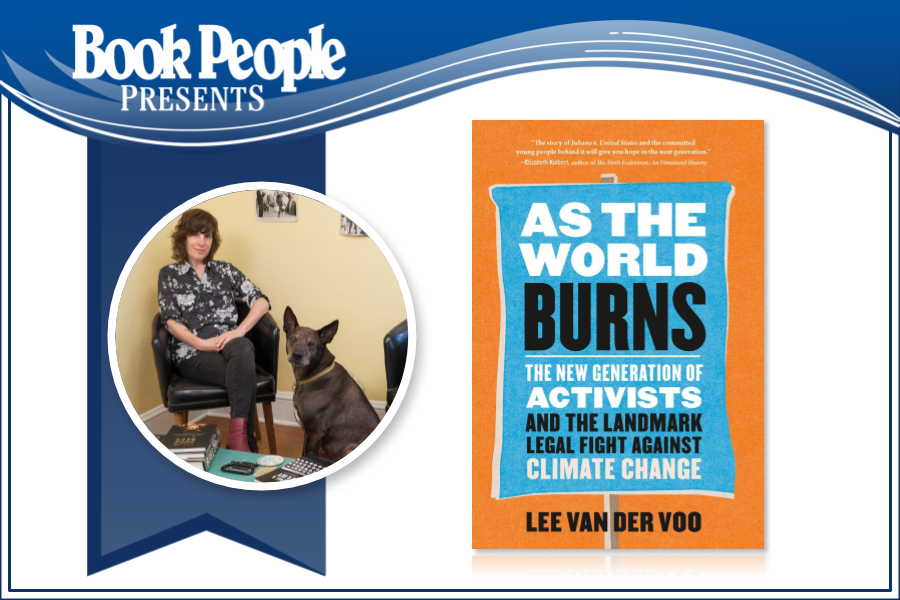 As the World Burns: The New Generation of Activists and the Landmark Legal Fight Against Climate Change (Hardcover)

In conversation with Rebecca Clarren

ABOUT AS THE WORLD BURNS

Award-winning investigative journalist Lee van der Voo reports on Juliana v. the United States. Combining unparalleled access to the plaintiffs and reporting on the natural disasters that form an urgent backdrop to the story, van der Voo shares a timely and important story about the environment, the law, and the new generation of activists.

“The story of Juliana v. United States and the committed young people behind it will give you hope in the next generation.” —Elizabeth Kolbert, author of The Sixth Extinction

Do our children have a right to inherit a livable planet? Is the government obliged to protect it?

Twenty-one young people from across America have sued the federal government over climate change, charging that actions promoting a fossil fuel economy violate their constitutional rights to life, liberty, and property. Their trial could be the civil rights trial of the century, but the government has used arcane legal tactics to stymie its progress at every turn.

As the World Burns follows the plight of the young plaintiffs, chronicling their legal battle as their childhoods are consumed by another year of drought and wildfire, floods and hurricanes, and the most tumultuous political season in modern history.

The plaintiffs wrenchingly describe personal experiences with recurring “thousand-year” floods, wildfire smoke so thick they can’t ride a bike to school, drought that threatens family farms, and disappearing coastlines that send waves lapping ominously at their doors. Along the way, journalist Lee van der Voo weaves their experience into a broader narrative of America, where politics and policy threaten the very existence of our youth and our way of life. While acknowledgement of climate change seems increasingly optional in an America resistant to inconvenience, what she found was a group of young people who could indeed articulate, not only their own intense fears about the climate impacts already upending their lives, but a clear understanding of how deeply counter-interests were entrenched in their government and society. And how personal that was beginning to feel.

And yet, theirs is ultimately a story of hope.

As the World Burns is climate breakdown like you’ve never seen it—through the eyes of the young.

Lee van der Voo is an award-winning investigative and environmental journalist whose work has appeared in the New York Times, The Atlantic, and The Guardian, among others. Her 2016 book, The Fish Market, which chronicles the gentrification of the sea in the name of sustainable seafood, won an Oregon Book Award for General Nonfiction

Award-winning journalist Rebecca Clarren has been writing about the environment, particularly the American West, for more than twenty years for magazines such as High Country News, The Nation, Salon.com and Orion. Her debut novel Kickdown, was shortlisted for the PEN/Bellwether Prize. She is now working on An American Inheritance, a book for Penguin Books that investigates the complicated relationship between her Jewish ancestors who homesteaded on the South Dakota prairie, and their Lakota neighbors.