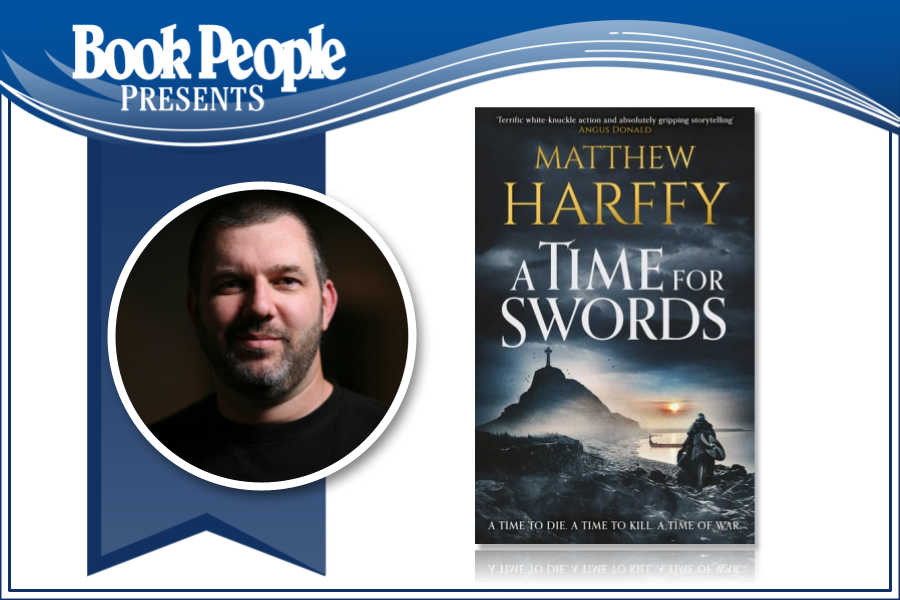 A Time for Swords (Hardcover)

In conversation with Christian Cameron

ABOUT A TIME FOR SWORDS.

Lindisfarne, AD793. The life of a novice monk will be changed forever when the Vikings attack...

There had been portents—famine, whirlwinds, lightning from clear skies, serpents seen flying through the air. But when the raiders came, no one was prepared.

They came from the North, their dragon-prowed longships gliding out of the dawn mist as they descended on the kingdom's most sacred site.

It is 8th June AD793, and with the pillage of the monastery on Lindisfarne, the Viking Age has begun.

While his fellow monks flee before the Norse onslaught, one young novice stands his ground. He has been taught to turn the other cheek, but faced with the slaughter of his brothers and the pagan desecration of his church, forgiveness is impossible.

Matthew Harffy grew up in Northumberland where the rugged terrain, ruined castles and rocky coastline had a huge impact on him. He is the author of the Bernicia Chronicles series, set during the turbulent times of seventh century Britain, and Wolf of Wessex, a ninth century thriller that plays out against the backdrop of the Viking attacks on the British Isles. His latest series begins with A Time for Swords. Set in AD 793, it follows the tale of Hunlaf, a young monk, who decides not to turn the other cheek when his monastery is attacked by Norse raiders. Matthew now lives in Wiltshire, England, with his wife and their two daughters.

Christian (Miles) Cameron is a military veteran and enthusiastic swordsperson, fisherperson, and wilderness camper. He lives in Toronto Canada with his partner and their seventeen-year old daughter. He’s the author of forty-one novels (Thrillers, Historical Fiction, Fantasy and Science Fiction) including Killer of Men, The Red Knight, and Artifact Space out this summer

Thank you for supporting Matthew Harffy, Christian Cameron, and your local independent bookstore!