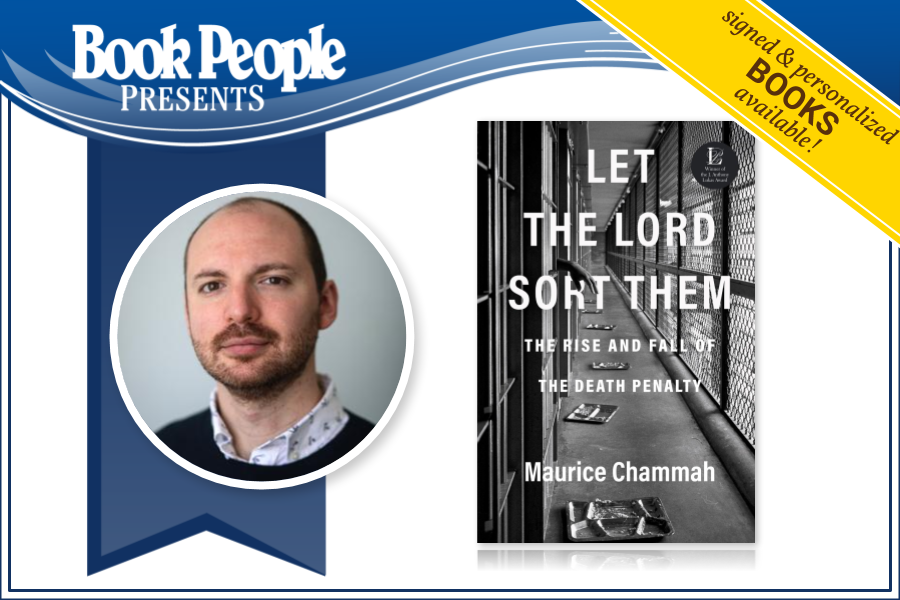 Let the Lord Sort Them: The Rise and Fall of the Death Penalty (Hardcover)

BookPeople presents, in partnership with The Texas Tribune, a conversation with Marshall Project reporter, Maurice Chammah on his new book, Let the Lord Sort Them: The Rise and Fall of The Death Penalty, moderated by Pamela Colloff, senior reporter at ProPublica and a writer-at-large at The New York Times Magazine.

NOTE: If you pre-ordered Let the Lord Sort Them prior to this announcement and you'd like a personalization added to your order, please email your request to customerservice@bookpeople.com

ABOUT LET THE LORD SORT THEM

A deeply reported, searingly honest portrait of the death penalty in Texas—and what it tells us about crime and punishment in America

In 1972, the United States Supreme Court made a surprising ruling: the country’s death penalty system violated the Constitution. The backlash was swift, especially in Texas, where executions were considered part of the cultural fabric, and a dark history of lynching was masked by gauzy visions of a tough-on-crime frontier. When executions resumed, Texas quickly became the nationwide leader in carrying out the punishment. Then, amid a larger wave of criminal justice reform, came the death penalty’s decline, a trend so durable that even in Texas the punishment appears again close to extinction.

In Let the Lord Sort Them, Maurice Chammah charts the rise and fall of capital punishment through the eyes of those it touched. We meet Elsa Alcala, the orphaned daughter of a Mexican American family who found her calling as a prosecutor in the nation’s death penalty capital, before becoming a judge on the state’s highest court. We meet Danalynn Recer, a lawyer who became obsessively devoted to unearthing the life stories of men who committed terrible crimes, and fought for mercy in courtrooms across the state. We meet death row prisoners—many of them once-famous figures like Henry Lee Lucas, Gary Graham, and Karla Faye Tucker—along with their families and the families of their victims. And we meet the executioners, who struggle openly with what society has asked them to do. In tracing these interconnected lives against the rise of mass incarceration in Texas and the country as a whole, Chammah explores what the persistence of the death penalty tells us about forgiveness and retribution, fairness and justice, history and myth.

Written with intimacy and grace, Let the Lord Sort Them is the definitive portrait of a particularly American institution.

Maurice Chammah is a journalist and staff writer for The Marshall Project. His reporting on the criminal justice system has been published by The New Yorker, The New York Times, The Atlantic, Esquire, and Mother Jones. He lives in Austin, Texas, where he and his wife Emily Chammah co-organize The Insider Prize, a fiction and essay contest for incarcerated writers sponsored by American Short Fiction.

Pamela Colloff is a senior reporter at ProPublica and a staff writer at The New York Times Magazine. Prior to joining ProPublica and the Times in 2017, she was an executive editor and staff writer at Texas Monthly. Her work has also appeared in The New Yorker and has been anthologized in “Best American Magazine Writing,” “Best American Crime Reporting,” “Best American Non-Required Reading,” and “Next Wave: America’s New Generation of Great Literary Journalists.” Colloff holds a bachelor’s degree in English literature from Brown University. She lives in Austin, Texas, with her husband and their two children.

Thank you for supporting Maurice Chammah, Pamela Coloff, and your local independent bookstore!