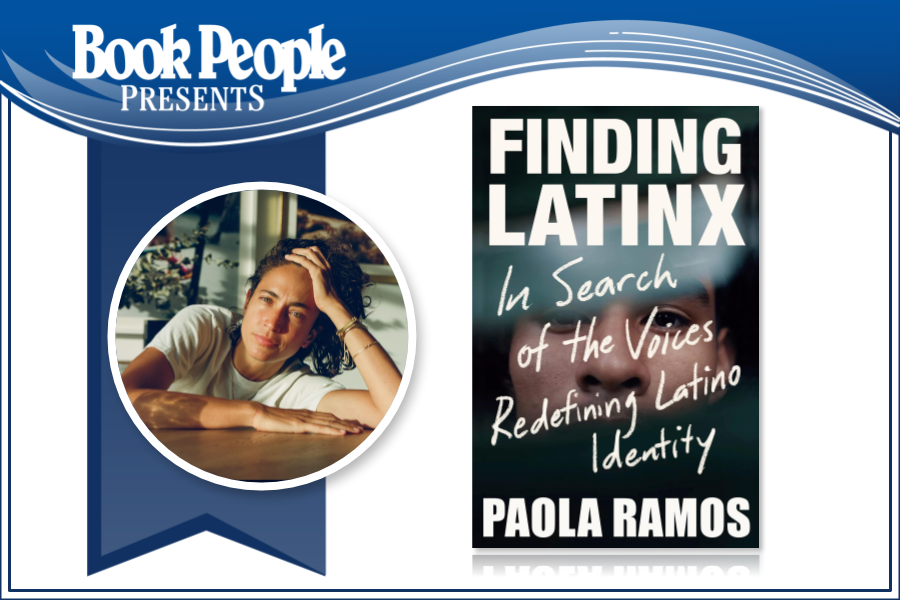 BookPeople is thrilled to welcome journalist and former political operative Paola Ramos to the virtual stage for a discussion of her debut work, Finding Latinx: In Search of the Voices Redefining Latino Identity. Ramos will be in conversation with Dr. Victoria De Francesco Soto. Registration is free and all book orders will come with a signed bookplate.

Debut author and journalist Paola Ramos travels to near and far corners of the country in search of Latin-X voices that illustrate a growing movement and represent a community of young Latinos that hold more political, social, and cultural relevance today than ever before

Latin-X was a term that originated as a way to be more inclusive towards queer and gender non-confirming members of the larger Latino community. However, over the years, the scope of the term has grown, reflecting a movement that is currently underway across the country: fifty-eight million Latinos are in the midst of rediscovering what their diverse identity means. Today, the “X” is an invitation to any Latino that has ever felt left out of the community. LatinX is a term that seeks to transcend demographics, disrupt stereotypes and create a more cohesive community.

This book is also deeply personal to the author, as it is also the first time she will be coming out publicly as a queer Latina. “I am queer, I am Latina, I am Cuban, Mexican and first-generation American,” she says, “These are words I have never been ashamed of saying out loud—but there’s a difference between passive recognition and really owning one’s blood.”

Paola Ramos is the host of VICE’s “Latin-X”, a weekly contributor for Telemundo News and an Emerson Collective fellow (Laurene Powell Jobs’ Foundation). Throughout these various roles, Paola is using different platforms to mobilize the Latinx community and tell their stories. Paola has also spent most of her career in Democratic politics and advocacy spaces. She was the former Deputy Director of Hispanic Media for Hillary Clinton, as well as a former political appointee in the Obama White House, and an Obama 2012 campaign staffer.

Ramos is Mexican, Cuban, Spanish, and American. She received her Masters in Public Policy from the Harvard Kennedy School and her B.A. from Barnard College, Columbia University. She has been featured in several outlets including Teen Vogue, NowThis, CNN, PopSugar, Fusion’s Rise Up, VICE Impact and Remezcla.

Victoria is Assistant Dean at the LBJ School of Public Affairs and a contributor to MSNBC and Telemundo. Her areas of expertise in the domestic policy landscape include immigration, Latinos, women and childcare, and economic equity. She was named one of the top 12 scholars in the country by Diverse magazine Victoria previously taught at Northwestern University and Rutgers and received her Ph.D. in political science from Duke University where she was a National Science Foundation fellow.

Victoria is a contributor to MSNBC and NBCNews.com as well as a political analyst for Telemundo. She has previously provided on-air analysis for CNN, Fox, PBS, Univision, NPR and has appeared on HBO’s Real Time with Bill Maher. Victoria is also published in both academic and popular outlets such as The Hill, POLITICO and Talking Points Memo. Through these different outlets, Victoria translates social science research into a more relatable form of information for a wide variety of audiences.

Victoria is a native of Southern Arizona and is a diehard Arizona Wildcats basketball fan. She is of Italian-Jewish-Mexican heritage and lives in beautiful Austin, Texas with her husband Neftali Garcia and their children. To learn more about Victoria or contact her visit DrVMDS.com.

Thank you for supporting Paola Ramos and your local independent bookstore!